The Loser Letters is an Instant Classic

Here is my review of The Loser Letters that will appear in tomorrow's print Catholic Post.  As you will discover, I highly recommend this book! 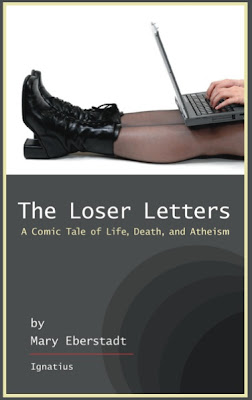 Never underestimate the potential and power of humor.  Those who can make us laugh can change hearts and minds. Unfortunately, too much modern humor is at the service of sarcasm or flippancy or denigrating the good.   We might laugh at what we see or read, but it isn’t necessarily ennobling or good for us.

That’s why it’s so refreshing to discover The Loser Letters, Mary Eberstadt’s darkly funny book of fictional letters from an “atheist convert” to the spokesmen of the New Atheism.
I first read The Loser Letters while ensconced on our back porch one Saturday, laughing out loud almost every page, startling neighbors and passersby, and shooing away children and husband when they came outside and tried to interrupt me.
Some weeks later, I was on a run, listening to a podcast news program that happened to feature spokesperson for an atheist group.  I confess here my usual reactions to these kind of interviews would have gone one of two unhelpful ways: either eye-rolling annoyance (not exactly charitable), or a profound sadness for the person and the state of the world—does anyone believe anything anymore?
But that day, I laughed, so hard I had to stop running.  And it wasn’t mocking laughter, but a laugh at our human foibles.  I felt for the person as I did for the fictional protagonist of The Loser Letters: a protective kindness and hope for the future.  Thank you, Mary Eberstadt.
The Loser Letters is written in the satirical style of The Screwtape Letters--imaginary letters from an elder demon to his demon-in-training on ways to tempt a human.  Screwtape is one of my favorite C.S. Lewis works, one I re-read every couple of years. I’ve eagerly read and enjoyed in recent years any number of books inspired by Screwtape, such as The Snakebite Letters by Peter Kreeft and The Wormwood File:  Emails from Hell by Jim Forest.  Still, Lewis is such a master of this mini-genre he created that those who have attempted a direct retelling haven’t been able to capture “it.”
What sets The Loser Letters apart is taking the genre and truly updating it for the 21st century.  The letters’ “author” is an unnamed 20something woman, an enthusiastic convert to atheism, who writes letters to leading atheist apologists like Christopher Hitchens and “alpha Atheist” Richard Dawkins to point out weak areas so they can correct them and get more converts.
The “Loser” is God, and believers become Loserholics and Loserphiles.  Atheists are Brights, and believers are Dulls. Understand the twisted logic?
Some of my favorite parts:
*the humor, which is dark, even edgy—necessarily so because of the context-- but hilarious, and not mean.  That is a hard balance, but one skilled writer Eberstadt makes easy.
*the frequent reference to why all the leading atheist evangelists are male (why is that?), and why the effects of the sexual revolution actually support the “Loser” side:
“I’ll confess a terrible weakness here and say that even now, after I’ve evolved so far, I still want to reach for the Xanax just thinking about an Atheist like any of you dating my hypothetical daughter—as opposed to say, a nice, antiabortion, save-sex-for-marriage Christian.  I know it’s terribly unfit; but is that just me?”
*the mini-education in not only modern atheism and atheists, and their more outrageous statements, but also in famous converts away from Atheism to belief.
*the letter that points out how so much of the world’s art, architecture and beauty is because of religious belief:
“The obvious fact that we Atheists have yet to wrap our heads around is that most of the world’s greatest buildings, and I mean  ‘greatest’ aesthetically, not literally, have been dedicated in one way or another to Loser, by whatever name he’s called in any given spot.
“Don’t get me wrong, guys—I’m not saying Frank Gehry and Le Corbusier and downtown Pyongyang aren’t all that!  But still.”
*the human story.  The genius of Screwtape is that while the letters instruct in the spiritual life (in reverse, from the perspective of the demons), it is over all a story of one man and his struggles to live as a believer.  The Loser Letters, is the story of a young woman and what her journey to atheism really means.
The Loser Letters is by turns laugh-out-loud funny, touching and extremely well done.  This book is absolutely an instant classic, in so many ways, and should be required reading, especially for college-bound students and young adults.
Posted by Nancy Piccione at 7:00 AM