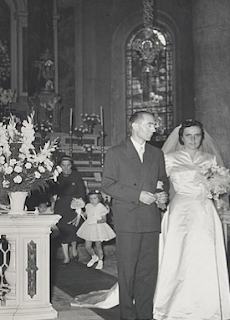 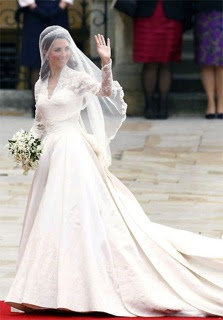 First, I feel compelled to tell loyal readers (especially my editor, who likes me to keep mostly to books, that I'm not going all Betty Beguiles or Modestia here with this post (wonderful as they are), but I truly feel there is a connection between Kate Middleton's wedding dress and a new Catholic App out this week.
I happened to see the royal wedding live this morning, which I did not intend to do, as a very small subset of my local Jane Austen book group is gathering for tea, scones, and DVR'd highlights of the royal wedding in a few hours.  However, I was up extra early and at the gym, where I was able to persuade the guys near me to change the tv channel from ESPN to the wedding "just this once."  And when I saw Kate Middleton's dress, one of my first thoughts was, "Wow, now that is a dress."  And my second thought was, "I think that looks like St. Gianna Molla's wedding dress."

Now, our family has had a lot of St. Gianna in the past year, as our oldest daughter chose St. Gianna as her confirmation saint.  She chose St. Gianna because of her great life story, her family life and her work as a doctor (she's interested in healthcare as a career path), but I think a bit of our fashion-conscious daughter likes that St. Gianna had a really great sense of style.

But the real reason I thought about St. Gianna's wedding dress is I had just been exploring last night the new App series from Little iApps.  I got the terrific one devoted to St. Gianna, and in looking through it last night, I noticed a photo of St. Gianna in her wedding dress.

So see if you agree with me.  Doesn't her dress look extremely similar to St. Gianna's?  I took a screenshot of the above wedding dress photo from the App.

I noticed one commentator talking about Kate's dress being very 50s-inspired, and Pietro and Gianna were married September 24, 1955, so I don't think I'm too far off the mark.

Two interesting facts about St. Gianna's wedding dress: she made it herself, and that she hoped to re-use it for vestments if she had a son who became a priest.

I will get the chance to use this eVotions App later today, as I plan to pray some of the prayers for the newly married couple for a happy, holy marriage.  St. Gianna seems a good saint for this stylish new princess, and I'm sure we all wish her and Prince William the best.

Now we're back to our regular books-centered writing.  Look for later today excerpts from two poems by John Paul II in honor of his beatification Sunday.  I'll be watching that, too.
Posted by Nancy Piccione at 9:34 AM