Following is my brief interview with local author Deacon Bruce Bradford, author of An Angel Named Herald, one of the books I reviewed in my December column about Christmas gift books.  Thanks so much, Deacon Bradford, for sharing about your book and your life here! 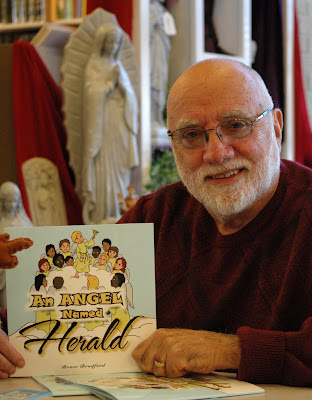 Q: Tell Catholic Post Book Group blog readers a little about yourself and your family.

I've been married 47 years to my wife Terry, and we have four children and 10 grandchildren. Both Terry and I were born and raised in the state of Maine. I worked for Pan American Airways for 25 years( and so I can say that the TV series is not all that accurate.). We lived in New York City; Shaker Heights Ohio; and then 38 years in Oak Park, just outside Chicago.  In 2006 we retired to Pekin to be closer to our daughters and five of our ten grandchildren. I was ordained as a permanent Deacon 26 years ago in Chicago. At present I am assigned to two parishes; St Joseph in Hopedale & St Mary in Delavan. I am an amateur actor (20 years) and am presently in a production of A Christmas Carol. This fall, I performed in “The Ghosts of Spoon River.”

I also volunteer driving seniors for the Miller Senior Center, and conduct a “Bible Connections” session for the mentally and physically challenged at PARC in North Peoria. I am constantly reading and enjoy travelling around the country with Terry to visit our boys in Houston and Minneapolis.  Isn’t retirement grand?

Q:  How did you come up with the idea for the book?

Six years ago I decided that as Deacon of the Mass I wanted to read something after the Gospel of Luke on Christmas Eve for the children.  I created Herald to be used as someone we could emulate as a messenger for God’s message of love. The response that first Christmas eve was “Where can we buy the book?” I of course had to say that Herald was in my head only.  People urged me to publish which I respectively laughed off.

When I moved to Pekin and was assigned to the two parishes mentioned I read the story to the children and again was asked about a book. A parishioner overheard my discussion. She walked up to me and said,”Publish it, and I want the first copy.”  Eight months later she had her copy.

Q. You mentioned that the book was initially intended for your grandchildren.  What made you want to publish it to a wider audience?

I asked myself why publish “Herald”?  I determined that if I published it would be for my ten grandchildren.  I wanted them to have something of their grandfather's creation. The original orders for books reflected that desire. Then I decided to get additional copies for the children on Christmas Eve and my friends at Parc. I started getting requests from friends for the book and suggestions that I do a book signing.  I’ve had one in Oak Park, one at Lagron-Miller in Peoria, and on December 20th I’ll be doing another book signing at “I Know You Like a Book” bookstore in Peoria Heights.  The book has been a blessing, and has reunited me with so many folks around the country.

Q.  What do you hope readers take away from “An Angel Named Herald”?

Herald’s story is our story.  Jesus came to create a “new” kingdom; a kingdom based on Love and action.  We like Herald, have doubts that we are up to the task, but God like he did with Herald provides us with the tools to be his Herald.  We, like Herald, are called to be God’s messengers.

Q. Is there anything else you would like to add, or wish I would have asked?

People have asked if there will be a sequel. My answer to that is Herald in our lives is a daily sequel.

Posted by Nancy Piccione at 4:44 PM