You may notice that the blog (and the book page in the print Catholic Post), has something of a sports theme going this month.  I've reviewed Alberto Salazar's powerful memoir, 14 Minutes: A Running Legend's Life and Death and Life.  Also this month on the book page, and here, “Meet a Reader” features local sportscaster Lee Hall.

Hall not just a local on-air personality (at WEEK-TV), but also a tireless champion of the St. Jude Memphis-to-Peoria Run, which over the years has raised more than $22 million for St. Jude and its Peoria affiliate.   Hall has been part of the Run for 25 years, and shows that he is not just a “reader,” but a writer, having written--as a labor of love--the recent Running for Their Lives: The St. Jude Memphis to Peoria Run.

Running for Their Lives is a thorough account all about the Run and its many personalities, interspersed with stories of patients and their families.   Hall says that the annual August 465-mile, four-day run is “part athletic endurance event, part summer camp, and part encounter group.”  It’s a lot of ground to cover, and Hall manages to share stories ranging from touching to silly about run personalities, St. Jude patients & their families who touch lives forever, some of whom go onto become longtime St. Jude runners.

Hall’s dedication, like those of all St. Jude Runners, is heartfelt and deserves our praise and support, as Former Peoria Mayor Jim Maloof writes in his foreword to Running for Their Lives.  Maloof himself is the original St. Jude champion, since he brought the St. Jude affiliate to Peoria many years ago.

My thanks to Lee for being such a great "Reader" this month! 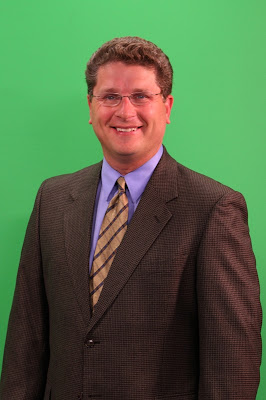 How you know me:

I have been Sports Director at WEEK-TV since 1988, where I started as an intern in 1984.   I’m also in the IHSA Network, where I do play-by-play and sideline reporting.

I’m a member of Blessed Sacrament Church in Morton, where my four children have all attended and played sports, so many people may have seen me in your parish gym at one time or another.

Why I love reading:
You might was as well ask why I like breathing. Reading has been a huge part of my life since I was a young boy. My Mom & Dad both grew up during the Depression and didn't get as much education as they would have liked, so they encouraged me to read and study. They didn't have to push too much on the reading part. I loved reading about Daniel Boone, Abraham Lincoln and other real-life heroes. Non-fiction and biographies continue to dominate my interests.

I am currently reading a couple of sports books: Landry's Boys: An Oral History of a Team and an Era by Peter Golenbock and Where's Harry?: Steve Stone Remembers 25 Years with Harry Caray by Steve Stone and Barry Rozner.

Landry's Boys is a history of the Dallas Cowboys organization. I have been a fan since the Roger Staubach days and find the behind-the-scenes fascinating.  I love Where's Harry? because I miss Harry Caray terribly.  He made baseball games into an event.

I recently finished The Kennedy Detail: JFK's Secret Service Agents Break Their Silence by Gerald Blaine, Lisa McCubbin and Clint Hill.  Anything Kennedy, Lincoln, or Civil War related is right up my alley.

I also read from Jesus Calling everyday. Its daily readings are Scripture-based, but written in modern English. I happened upon the book while trying to market my own book, Running for Their Lives, and it has changed my life!

Team of Rivals by Doris Kearns Goodwin is one of my favorite books of all time. It documents how President Lincoln formed his rivals for the Republican nomination into a wartime cabinet, convincing them to put their personal interests aside for the country’s best interests. If only today’s politicians could do the same!

Another favorite is Into The Wild by Jon Krakauer, chronicling the story of a college graduate from a wealthy family who turns his back on that lifestyle to live off the land.
Posted by Nancy Piccione at 7:00 AM