It’s been 10 years since 9/11, but I can still recall exactly where I was and every tiny detail of how I learned what had happened. It was an almost too-sunny Tuesday morning as I drove over the McCluggage Bridge on my way to a Scripture study.  Our two little daughters were in their carseats, sweetly singing along with a CD about the three little kittens who lost their mittens….  Then one of my sisters called my cell phone to tell me about the attack on the Twin Towers and the Pentagon, where her husband worked at that time, and life changed for everyone.

That kind of total recall is probably true of most Catholic Post readers, but what do we do with those memories?  As we approach the 10-year anniversary of the attacks, remembrance is not just important, but healthy, especially when we do so prayerfully in light of our Catholic faith. 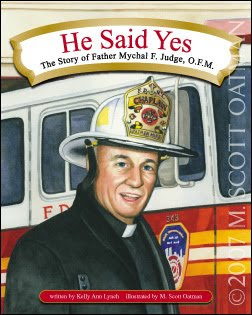 He Said Yes:  The Story of Father Mychal Judge

In his writings and talks, Pope Benedict XVI returns again and again to the theme of saying “yes” to God.  The Holy Father ended one of his addresses to World Youth Day pilgrims in Madrid by saying, “(L)et us pray that, like (the Blessed Mother), our “Yes” to Christ today may also be an unconditional “Yes” to his friendship, both at the end of this day and throughout our entire lives.”

Saying yes to a life of faith is not a one-time event, but a daily, often moment-by-moment, decision.  This is captured beautifully in the children’s picture book, He Said Yes:  The Story of Father Mychal Judge by Kelly Ann Lynch.

Father Mychal Judge was the NYC fire department chaplain, and is listed as the first official casualty of 9/11 at Ground Zero.  The photo of his body being carried out of the North Tower by NYFD members remains one of the iconic images of the destruction that day.

In the years after Father Mychal’s death, there have been several well-written biographies written about him. These books recount how Father Mychal prevailed through numerous obstacles--such as family dysfunction and his own alcoholism--to be and to bring Christ to so many hurting people.

Yet in its simplicity, He Said Yes captures the central message of Father Mychal’s life more successfully.  The picture book does this by distilling Father Mychal’s essential work: how he continued to say yes to Christ, to his vocation, and to the people he served, until the very end.  A bonus is that proceeds from the book He Said Yes benefit Mychal’s Message, a non-profit started by author Lynch to help the homeless and poor. 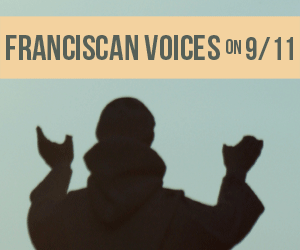 Franciscan Voices On 9/11 by St. Anthony Messenger Press, is a collection of reflections on the attack and its meaning 10 years later.    Since St. Francis was known so much for his emphasis on peace and reconciliation, having a Franciscan perspective to mark the decade is enriching.

Essays range from the deeply personal, such as “Looking Back, Moving Forward”--  those whose lives have been dramatically changed after 9/11; to several political analyses; to a beautiful essay, “Prayer Out of Pain,” by Franciscan Scripture scholar Michael Guinan, who uses Lamentations as a way to help people respond to the memory of 9/11.

Easily the most interesting and informative section is “Franciscans and Muslims:  Eight Centuries of Seeking God,” by Franciscans Jack Wintz and Pat McCloskey.  Here is history about St. Francis’ trip to the Holy Land in 1219 to preach the gospel to the Sultan (the Muslim leader) during the time of the Crusades, and how Franciscans still maintain a considerable presence there to this day.

As Wintz and McCloskey recount, because St. Francis approached in peace and love, and disregarded the gifts offered to him, the Sultan showed greater respect for him and did not kill him outright.  St. Francis bravely “proclaimed the triune God and Jesus Christ, with steadfastness, courage and spirit,” and the Sultan told him, “Pray to God for me, that God may reveal to me the law and the faith that is more pleasing to him.”  Franciscans still serve in the Holy Land as guardians of many shrines.

Franciscan Voices on 9/11 is available in only as a Kindle book, which can be read on a wide variety of devices.