My account of our literary pilgrimage to Minnesota to see Betsy-Tacy sights proved so popular that I resolved to try to post more about my favorite authors and places.  I'm not going to post photos of England and Jane Austen sights today, but I do want to let Midwest readers know about a great play adaptation of a Jane Austen novel, since in my mind it qualifies as a literary pilgrimage.

Some years back, I had discovered a great Jane Austen fan blog called Austenblog. Margaret Sullivan writes there are about Jane Austen books, movies, adaptations, and spin-off books.  If you are a die-hard Janeite like me, it's really a lot of fun to get updates on Austen-related things.

Last year, through Austenblog, I found out about an adaptation of Sense & Sensibility at Northlight Theatre in the Chicago suburbs.  My older daughter and I went up to see the play--wonderful--and so enjoyed our time up there.  I think because I got on Northlight's mailing list, I received a postcard this spring about Lifeline Theater's production of Pride & Prejudice.  I resolved to take some combination of our family to see it in the spring, but life was too busy, and we never made it.  Finally one day a few weeks back I noticed the postcard on the fridge and thought, "Oh, we wanted to see that!"  Fortunately, the play was extended through July.  I was able to get tickets for myself and my daughters, and now that we've seen it I know why. 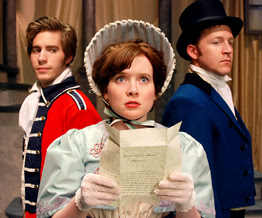 The actors were charming, the story was true to life, and we had a very fun day seeing a 4 p.m. showing one Sunday recently.  I highly, highly recommend seeing the play if you get the chance.  It's still around for a few more weeks.

So I've already described two pilgrimages already (the trip to see the play versions of Sense & Sensibility, and Pride & Prejudice). In another post I will share with you some photos from England and Jane Austen sites.

But I would like to end this post, for those who have not  had enough about Jane Austen already (how is that even possible?).  Please take a moment to view these two short and wonderful videos....

The first is a utterly charming video by a New Zealand singer, Holly Christina, of her song, "Dear Jane Austen."

Ashamed true confession here: when I first watched the video, on Austenblog, I left a comment saying that the non-Regency dress worn by Holly was distracting to me.  But the song was super catchy, and the singer and the entire video could NOT be any more appealing.

Even more ashamed true confessions:  the very singer, Holly Christina, sent me a very kind e-mail afterward the comment (she had found me through the explaining that she lives in New Zealand, and it was nigh impossible to find the right sort of Regency dress, but she really loves Jane Austen and hoped that I liked the video despite that.  I so meant to e-mail her back apologizing and saying how much I dearly loved the video, but I only remember at strange times, like while I'm out running or  elsewhere and not near a computer.   I also wanted to offer the sewing service of my teenager daughter, who made herself a Regency dress from a Sensibility.com pattern, and I'm sure would love to travel to New Zealand and make one for Holly.  At least it's nice to imagine that she could!

In any case, I never sent Holly Christina a message back, and so this becomes my blog apology, for all the world to see.  Holly, your video is delightful, you are gracious, and I look forward to even more great music from you in the future.

Finally, here is another great video put together by Margaret Sullivan and some others as a Henry Tilney spoof of the Old Spice commercials.  Favorite line: "I'm asking you to dance, unlike some gentlemen who refuse to dance. I love to dance, and you are handsome enough to tempt me."  Also LOVE that Henry Tilney has a puppy:

Posted by Nancy Piccione at 8:00 AM