This post is unofficially subtitled, if you don’t like photos in a post, you might just want to come back in a few days, after I share over the next few days some of the many experiences running my second marathon earlier this month, and my first time as part of the LIFE Runners team.   This has taken me much longer to post than I expected, but I think readers and friends will enjoy hearing about my experience.

You may be thinking this is a little far afield from books, my primary focus here.   And I do promise that some of this relates to books--promise!  And I will do a round-up of great pro-life and running books that I’ve reviewed in past years, as well as have a Q&A with a fellow LIFE Runner who authored a book recently about his cross-country run.

But for now, it’s all about the marathon and LIFE Runners; definitely on-topic as far as I’m concerned.

I have been training for since early in the summer, and only several weeks ago discovered the group LIFE Runners and that the group was doing their annual race weekend in St. Louis, just a few hours away.  I wrote about changing my plans here, and so I signed up for the LIFE Runners team as well as the St. Louis Rock’n’Roll Marathon.

LIFE Runners was founded in 2008 by two Air Force Lieutenant Colonels--Rich Reich and Pat Castle, to “pray, raise funds, and run...All In Christ for Pro-Life!”  The group has a goal for a major race or race series each year, and have been running them since 13 LIFE Runners ran the 2008 Chicago Marathon.  The group has grown to the 252 who ran in the St. Louis Race series, the largest charity group (by far) there.   Runners agree to raise funds for one of several local charities, and run wearing a LIFE Runners t-shirt while running the race. Impressive!

I confess I was a wee bit intimidated by all the military active duty or veterans, since I’m  not ... military... but the LIFE Runners is very diverse, and everyone was very welcoming, and I was glad for high level of organization and great experience of pro-life solidarity that they created.

The expression “High Five!”  comes from Pat Castle (one of those Lt Cols) , the president of the group, and he is super-motivating, to say the least.  High-fives abound, whether on the LIFE Runners website, the Facebook page, or in person from Pat.

Now, I’m going to use the expression “high five” in this post a lot, and I want to make perfectly clear that I am in no way making fun of “high five.”  I think I did first smile when I heard and saw all the “high fives,” but I quickly realized the genius of it; how it brings us together and encourages in a genuine way.  I feel confident that the other LIFE Runners are smiling along with me and nodding.  It’s just a great expression in so many ways, and captures Pat’s personality and LIFE Runners in general.

We made this a family trip, and I have to high five! my husband and kids for being good sports about various issues with the weekend.

We arrived very late Friday night, so Saturday morning was dedicated to a little sleeping in as well as going to the health and fitness expo to pick up my race bib as well as check things out.  Now, one of the things about big race expos, as many articles  and books will tell you, is that you tend to overspend and buy weird things you would never normally buy, like crazy running tights or hats with strange messages on them.

I kept saying to Joseph and the kid, but it didn’t seem to have much effect on them or me, because we ended up buying a few things, but fortunately none of them were particularly crazy.

The free samples were a big hit.  Unfortunately, we kept finding our 9-year-old at this free sample booth, looking with puppy dog eyes at the young women handing out samples. He was not successful (high five! sample ladies), I’m happy to report, but I couldn’t resist a photo and a laugh, as well as endure our teenager saying, “Don’t encourage him!” 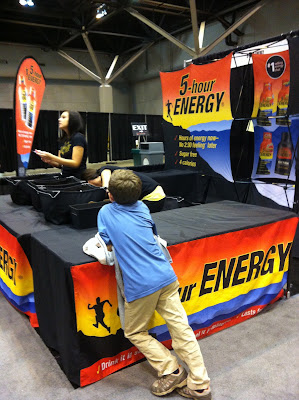 There was just a little time to grab a quick late lunch and head over to the Cathedral Basilica for the LIFE Runners gathering before the 5 p.m. Sunday Vigil Mass. 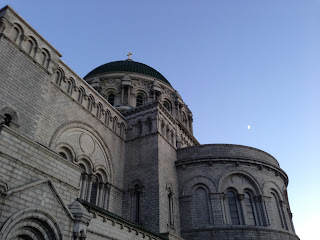 While I’d been in Facebook contact with the LIFE Runners team, I had never met anyone in person or knew any of them, so I’ll confess to being nervous.  But the group was welcoming, and I had no trouble making friends.

We started with a group photo.  According to the LIFE Runners website, there were 252 LIFE Runners in St. Louis, making it by far the largest charity group running the races.  A large contingent was there for the pre-Mass photo: 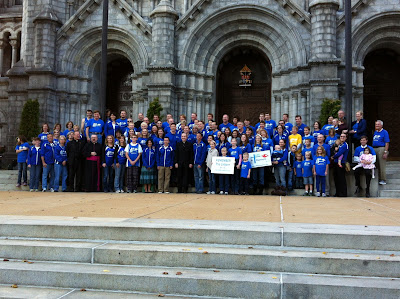 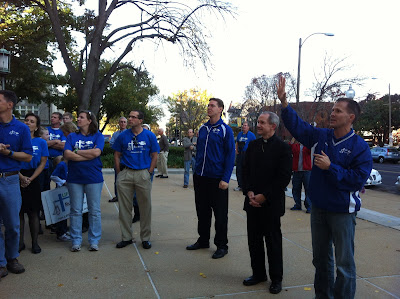 
Next we had a talk by a priest from Steubenville, who it turns out was a fellow marathoner. 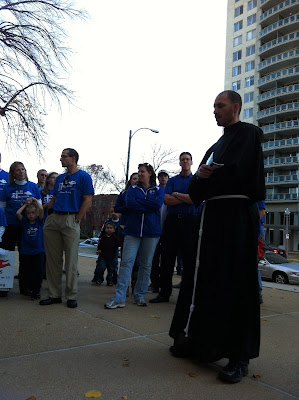 Finally, Karla shared her experience of having an abortion at age 15 and healing after many decades, and shared how important it is to be a witness to life.  This is at close range becuase the cathedral’s bells started to go off during her talk, so Pat Castle brought us all in close to Karla, which made it that much more intimate an experience, and beautiful and healing for all of us. 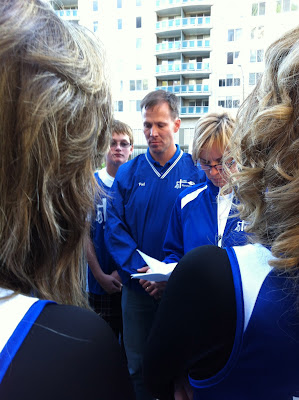 Mass was next in the beautiful Basilica, and another large group there for Mass was a Society of St. Francis de Sales, who happens to be the patron saint of journalists.  I thought that was neat coincidence for me. 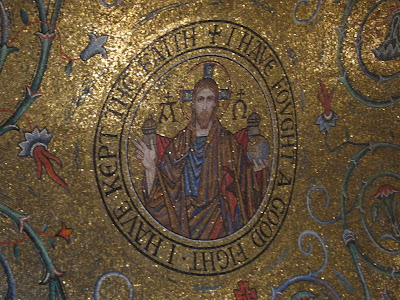 Here's one of the many beautiful mosaics inside the Cathedral Basilica.

After Mass, we went over to a gathering space next to the cathedral for a pasta dinner served by the Knights of Columbus.  As we waited in line for buffet, diners could pass by booth set up by various groups, in particular the three charity beneficiaries of this year’s LIFE Runners races.  Our kids enjoyed getting to chat with the staffers at the Thrive booth.  Thrive is one of the beneficiary charities for the LIFE Runners this year.

What I loved was getting to meet the brewers from Two Lawyers and a Priest Brewing, who brewed a special beef for LIFE Runners. High five, Catholics who brew beer for pro-life!  They were giving away bottles in a kind of silent-auction method, and I’m happy to say that I did get a bottle, though I’ve not yet had the chance to enjoy it.  I’m going to split it with my husband. 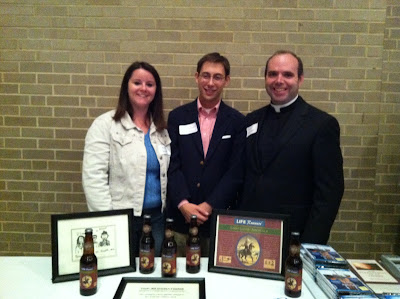 So much was memorable about the dinner and program.  Jennifer Brinker writes about the LIFE Runners and the weekend more at the St. Louis Review. 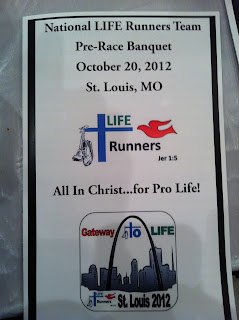 Bishop Paprocki, one of the LIFE Runners (and a seasoned marathoner) received the first LIFE Runner of the Year award.  His remarks were amazing--he spoke about the Communion of Saints and how he feels more connected to them during distance running.  In particular, he told a moving story of how he lost his father between the time Bishop Paprocki qualified for the Boston Marathon and ran the Boston Marathon, and how he felt the presence of his father during Boston.

I think it is difficult for me to convey how good his short remarks were; I’m not sure if it sounds trite; he is an excellent preacher and captured this beautifully. I have definitely felt that "communion of saints" feeling, when I ran a half-marathon less than a year after my father passed away.  There really is something unique about distance running, not just in a physical way, but in a spiritual way.  I’ll write more about that tomorrow and the next day.

That’s it for Part 1 of my LIFE Runners marathon experience--high five to me for finishing it before the end of 2012!  More tomorrow.