No, I'm not starting a new blog series of Jane Austen Monday, though I would dearly love to.  I just wanted to share some links before this month ends.  January 2013 marks the 200th anniversary of the publication of Austen's Pride &Prejudice.  As longtime readers will know here, Austen is probably my favorite author and I read and re-read her books regularly.  I have at least four shelves on two different bookcases full of multiple copies of her novels (including The Oxford Illustrated Jane Austen, a present from my husband several years back), biographies, graphic novel versions, retellings and so forth.

I discovered from getting the newsletter of the Jane Austen Centre that it was planning a live reading of P&P.  I can't seem to find the latest news on the read-a-thon (here is an earlier story about it), but I think it is a great idea, and I would enjoy getting to stream parts of it if they still do it.

Earlier this month my daughters and I hosted a Jane Austen tea party that was surprisingly fun for all ages.  We had lots of tea, some of my favorite scones. My cell phone photos snapped throughout the day did not turn out very well.  I'm sure that is shocking and never happens to you.  So I'm sharing images and video here from around the web. 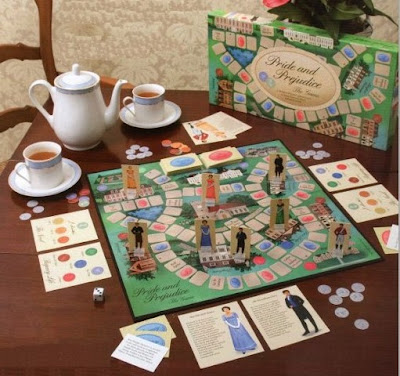 We played the "Pride & Prejudice" board game, available from the game designer here.  Actually, the moms were busy visiting and laughing in the kitchen, so none of us got to play the game.  The teens and little girls played the game.  From what I can gather, it was quite a competitive event.  Very fun. (and yes, I would love to get A Christmas Carol game made by the same company, in case anyone is looking for present ideas for me for next Christmas).

On the subject of Jane Austen-inspired games, here is a link to a Jane Austen trivia game.  I may have to add this to my wish list for next year's party, though nothing can top the P&P board game, in my mind.

More details from the party:

Food and drink.  We had many kinds of tea, as well as hot chocolate.  But the tea was the biggest hit, even for the younger ones. 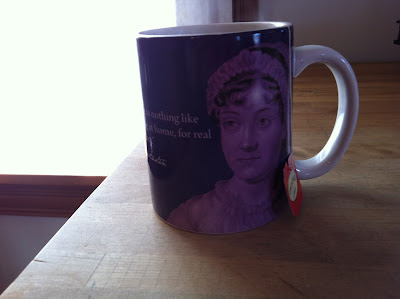 This mug, also a gift from my husband, reads, "There is nothing like staying at home, for real comfort."  This was actually not used at the party, since I had out our "good" china teacups, and various other assorted proper teacups (with saucers).

I made my famous scones in two versions: plain cream scones, and cinnamon chip scones.  How I make my scones is a state secret. Actually, it's too complicated for me to share in a n online recipe.  If any of the party-goers would like to know how to make my scones, I would be glad to have you over for a personal tutorial.

My favorite find of the last year was a recipe for homemade cinnamon chip scones.  They absolutely make the scones!  Here the DIY recipe that I basically use--I don't think I changed anything.  (I am infamous for changing recipes a little here or there, which is what makes my scone recipe so unreliable read off the page).

I also made (and changed slightly) Pippa Middleton's Millionaire Shortbread (this is a link to Pippa's tumblr recipe for it; unfortunately, it's in British measures, but this is the recipe).  This is from her newish book, Celebrations, that I picked up off the new books shelf at our local library.  It's actually a really nicely done book--reminiscent of Martha Stewart books, but not quite as fussy.

When I was cutting the layered shortbread the night before the party, my husband and I sampled it, and we thought "meh."  I was sort of annoyed to have spent the time and butter for it, because as I said, plain shortbread would have been just fine.

Apparently a night's rest does wonders for the stuff, because it was the huge hit of the party and praised by everyone, and there were not even crumbs left over.  I tried some again when everyone was raving about how good it was, and I did like it better.

I had put on the invitation that promptly at 3 p.m., we would start a showing of the 1995 BBC version of Pride & Prejudice (the Colin Firth version).  I thought perhaps a few of the teens and moms not too busy would want to stay, but it was a busy weekend.  It turns out it was just the Picciones, so we opted to wait until everyone left shortly before 5 p.m. to start watching.  We only got through the first DVD of this (meaning the first 3 hours) that day, and still haven't watched the rest.  We really need to finish it before the month is out.

Now for one more book to relate specifically to Jane Austen in the modern culture.  Last year,  I received a review copy of The Jane Austen Guide to Happily Ever After by Elizabeth Kantor.  Kantor argues compellingly how Jane Austen-manners (not dancing the right way or wearing Regency gowns, but rather guarding your emotions, learn about potential partners within the context of your family & friends, and so forth).  It's a pretty sensible guide, but definitely meant for college or post-college aged women. Worth a read!

Do you have an obsession for Jane Austen, like me?  What are you doing to celebrate the 200th Anniversary of Pride & Prejudice?

Finally, here is one super sweet British video about the lure of Jane Austen and Bath.  Makes me want to go back right now.