Q&A with Kelly Ann Lynch, author of "He Said Yes: The Story of Father Mychal Judge" 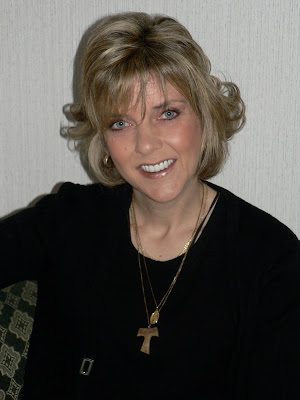 I'm so grateful to author Kelly Ann Lynch for doing this Q&A with me this month about her book He Said Yes:  The Story of Father Mychal Judge, considering her busy schedule this month marking the 10th Anniversary of 9/11.    Thanks, Kelly!


Father Judge was your family friend for many years.  After his death on 9/11, how did you get the idea to write a book about his life?

One of the first thoughts I had after Father Mychal’s death was that his story needed to be shared, especially with the next generation of children who might otherwise never know of the man who changed the lives of so many.


I was at a weekday Mass when the words, He Said Yes, came to me, and I began picturing Father Mychal’s life and all the ways he said yes … from the time he was a little child in Brooklyn and began shining shoes to help make ends meet for his family; becoming a priest; ministering to the homeless, recovering alcoholics and the dying; becoming the fire chaplain to the New York City Fire Department; befriending NYPD Detective Steven McDonald and his family; blessing my daughter before her surgery; and ultimately saying “yes” on September 11, 2001 when he gave his life.  I believe the inspiration to write this book came directly from the Holy Spirit.  I was “on fire” when I left Mass that day after hearing those words (He Said Yes) and began writing notes immediately.  I could see the story unfolding before my eyes.  I called a friend – an artist who created the first logo for Mychal’s Message – M. Scott Oatman – and I asked him about getting together to create a book.  He said, “yes” and then explained how he had an idea for an illustration, using doves in place of the Twin Towers, to depict that fateful day.  That illustration, the last page in my book, was the first painting completed.  I believe the book was a product of divine inspiration and two friends who said, “yes.”


After showing the book to Franciscan priest, Father Cassian A. Miles, OFM, he said, “this book should be published.”  We contacted Paulist Press, and … well, they said, “yes” too.  The book has sold over 6,000 copies since its release in 2007.

I write in my review that I felt your children’s book was more successful than other bios of Fr. Judge in capturing Father Judge's essential work and how he “said yes.”    Thoughts on that?  Was it easy or difficult to write?

It was always my desire to share Father Mychal’s story with children.  I believe in children – their prayers, their presence, their witness – they are the next generation.  To teach them about a man who lived simply by loving others (while passing judgment on none) was my way of allowing God to work through me and leave a beautiful legacy for Father Mychal – the man, the friend, the priest who changed the life of my family.  The book is written simply and shares the story of the priest I knew, the stories I knew.  It is written to encourage and inspire children to be the best they can be, to say, “yes” and to allow God to work through them.  I believe it also teaches children that they can become anything they desire when trusting in God’s Will for their lives and that ordinary people can do extraordinary things when following God.

Your website (www.kellyannlynch.blogspot.com) shows a range of activities that you are currently involved in—speaking, presentations, storytelling—to spread the Catholic faith.    Are you planning to write any more books in the future?

I have written another book that is currently in the process of being published (by Paulist Press).  It is a children’s book and encourages children to be who they are.  It is okay to be different because God has a special and unique plan for each of our lives.  It’s a unique book, unlike any others on the market, in that it is a fictional story based loosely on actual accounts in my own life.  This book was also inspired by the Holy Spirit.  Two others that I am also working on are written for children.  I work with children all year in “Armata Bianca” (White Army), a children’s rosary group, where we discuss and learn the beauty of growing up Catholic in today’s world.  I encourage the children to wear a scapular, pray the rosary, and know their saint friends, while teaching them the importance of prayer, penance and the sacraments.

Tell Catholic Post readers more about Mychal's Message, a non-profit you started to help the homeless and poor.

Mychal’s Message was founded in 2002 by my daughter, Shannon Hickey.  It is a non-profit organization created to honor the life of Father Mychal F. Judge, O.F.M. (From our website, my words):  During his life, Father Mychal shared his message with the rich and the poor, the healthy and the sick, firefighters, police officers, and friars, and the many men, women and children who called him 'friend.' His message was simple, interdenominational, and touched many lives. It is the mission of Mychal's Message to continue sharing that message with others. It is a grace to walk in his footsteps and encounter the homeless and poor, meeting basic needs, while restoring dignity with love.
Mychal's Message began in January 2002 as 11-year-old Shannon marked the anniversary of her liver transplant. Every year she celebrated her anniversary with a party, presents and cake. That year, Shannon decided to mark the anniversary in a more meaningful way. In lieu of gifts, she asked for socks for the homeless. "I'll give them away in memory of Father Mychal," she told us. Father Mychal, a dear family friend, was an inspiration to Shannon and on her transplant anniversary in 2002, she wanted to celebrate her life by remembering his.
Word spread quickly and before long, Shannon collected 1,500 pair of socks. A printed card with Father Mychal's prayer was attached to each pair. As those first socks were being distributed to the homeless, we realized that the prayer was as important as the socks. The prayer became Mychal's message. Father Mychal inspired Shannon, Shannon inspired us, and Mychal's Message was born.
On the Breadline at St. Francis Church in New York City where those first socks were distributed, a man approached my mother (Shannon’s Nana) and asked her for underwear.  My mom could not forget that man or his request all day.  That night, she told us, “I know what I want for my birthday this year … men’s underwear.”  And “Blessed Bloomers” was born … and we return to the streets of New York City every year on the anniversary of September 11 with new underwear for the homeless.
Mychal’s Message is a family-run ministry.  My dad hand writes a personal thank you note to each person who sends a donation.  My husband sorts and packs the vans each time we travel into the city.  My mom does the shopping and packing.  I write the newsletters and press releases.  My children distribute the items to the homeless.  And there are no salaries paid, no overhead expenses other than printing of prayer cards, newsletters and postage.

We attended the annual Walk of Remembrance in NYC last weekend, and that is always a special day for our family as we remember and honor Father Mychal and all those who gave their lives on September 11.


On the anniversary of September 11, as a family, were on the Breadline of St. Francis of Assisi Church in NYC to distribute our annual “Blessed Bloomers” to the homeless.  This year, we also distributed a full-size chocolate candy bar to each of the men and women we encounter – something “sweet” on a “bitter” day.  We attended the 11:00 Mass at St. Francis Church (the firefighter’s Mass) with FDNY Chaplain Father Christopher Keenan, OFM.  We  then went to the Firemen’s Museum for the 1:00 dedication of Father Mychal’s helmet and bunker coat (found after 9/11 at Ground Zero, unharmed and intact).  We had hoped to visit Totowa, NJ, just outside NYC, where Father Mychal is buried, but the recent flooding in that area prevented us.


It has been a blessing for me and for my family to walk in the footsteps of Father Mychal Judge.  We are always aware that none of this would be possible without the generous donations of people all over the country.  And we are grateful, so grateful, that others allow us to use their donations to help others in Father Mychal’s memory.


I had hoped to share with Catholic Post readers a photo of Father Mychal's grave, so when Kelly Ann Lynch mentioned she would have liked to have visited his grave on 9/11, I knew this was the right day.   The reason I  have a photo of Father Mychal's grave (this one from last summer) is that my husband's grandparents are buried just a few yards away in the same cemetery, and so for years, when we make a visit East to visit family, we visit his grave, as well.  His grave is always decorated. 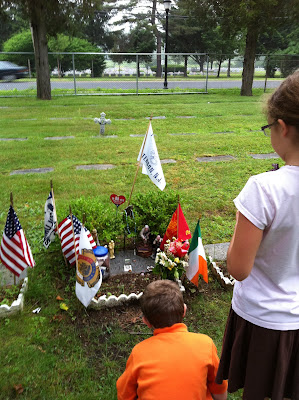