Not Far from the Kingdom of God?

I have a Facebook friend (he's the husband of a delightful local friend, both with terrific senses of humor), who has a guiltily funny meme going whenever a celebrity dies.  Here's a basic example:  when Leslie Nielsen died, said friend posted a photo of Liam Neeson and writes as a caption, "Leslie Nielsen, you will be missed."

The comments at first (and even now) can be part of the fun, as friends write, "Hey, I think you've got the wrong person."  Etc.  Much silliness in the comments usually ensues, and some are much more guilty pleasures than others.

I happened to see the couple at a gathering late last week.  I confided in them that my first thought (instead of a prayer for the repose of her soul) when discovering that Helen Gurley Brown (HGB), the longtime editor of Cosmopolitan magazine, had died, was thinking, "I wonder whose photo for her will be on (friend's) Facebook page."

We laughed about it.  He mentioned how it has taken on a life of its own, with people messaging him whenever a celebrity dies.  I gave my mea culpa for the time last year when I myself did that, when some minor television celebrity I can't now recall, had passed away.  I sent a message along the lines of, "You should know that (minor celebrity) has died. And will be missed."  Mea culpa, indeed.

Fortunately for me and the state of my soul, I was driving at the time I learned of HGB's death, and so couldn't check Facebook.  (So, in fact, I did take a moment to pray for her; Facebook friend was unaware of her and didn't "feature" her).  Later that night, I discovered via Twitter and Facebook that another famous woman, Nellie Gray, founder of the March for Life and stalwart pro-life activist, had died the same day.

And so despite my initial first guilty thoughts about Helen Gurley Brown, learning that she had died the same day as Nellie Gray, gave me a kind of comfort.   I can imagine, because God has an excellent sense of humor, that Nellie Gray may have been invited to help shepherd poor HGB through the pearly gates, or at least in purgatory.  Nellie Gray could be pretty strict about things, and knowing that this quality of hers would certainly be sloughed away, I can picture these two contemporaries (they were born just a few years apart) being together and important to each other in some unknown-to-us way.

Later, I discovered via Deacon Greg Kandra of The Deacon's Bench blog that HGB had been a million-dollar contributor to Catholic schools in NYC, and Cardinal Dolan had "danced" with her.  (read about the story behind the photo here).  Another sweet image, and one that makes me think, actually more hope than believe, as I've said before and on other occasions, "Not far from the Kingdom of God." 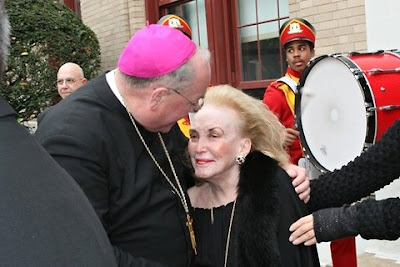 Email ThisBlogThis!Share to TwitterShare to FacebookShare to Pinterest
Labels: Catholic new media, modesty, not far from the Kingdom of God, pro-life