I'm grateful that now I do have a a connection and a reason to write about the Olympics (I thought about labeling this post "my 3 degrees of separation from the Olympics").  No, it's not because Michael Phelps looks uncannily like my oldest nephew (though he does, really!).  It's because Alberto Salazar, author of the June book I reviewed for The Catholic Post, can now call himself the coach of two Olympic medal-winners, Mo Farah and Galen Rupp, who took the gold and silver medals, respectively, in yesterday 10,000 meter race.

Here's my review of Salazar's open memoir, 14 Minutes: A Running Legend's Life and Death and Life.  I asked Salazar about the Olympics in our Q&A (you can read the whole thing here), and here's what he said:

We are lucky to have some of the finest distance runners in the world as members of the Nike Oregon Project. They include Mo Farah, a citizen of Great Britain, who joined our team two years ago, and Galen Rupp, a native of Portland, Oregon, who I have been coaching for more than a decade. Besides being ideal training partners, they are also great friends. Mo and Galen will both be running the 10,000 meters at the London Olympics, where they will be competitors rather than teammates. It will be very interesting to see how that plays out.

Well, we can all see how that played out, the joy both teammates had for each other as they placed first and second.  In particular,  I noticed that USA Today has a great article about Galen Rupp's silver medal and Salazar's long-term coaching strategy.  ESPN also reports about how Farah and Rupp worked with each other to help keep Farah (and Rupp, it turns out) paced well through the 10,000 meter race.  Here's a great photo from ESPN from just after the race: 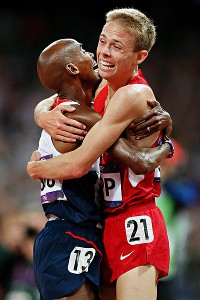 Congratulations to Farah, Rupp and Salazar!  I'll be watching the 5,000 meter race later this week, and hope for more medals from the athletes of The Nike Oregon Project.

Update, Wednesday, August 8: Rupp and Farah both easily won places in the finals of the 5,000.  That race will be Saturday.