Treasure in Clay: The Autobiography of Fulton J. Sheen 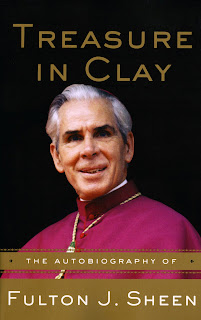 This is my review that appears in the April 18 issue of the The Catholic Post:

Don’t be alarmed if you feel tired after reading “Treasure in Clay,” the autobiography of Fulton J. Sheen, celebrated son of the Peoria diocese, and now under consideration for sainthood. I did, but not because the book is nearly 400 pages—it’s a fast, enjoyable read. It’s because the bishop was so busy and prolific in his vocation.

Fortunately for us, he was also an engaging writer. In particular, he’s the master of telling a great story. “Treasure in Clay” is full of those stories;, edifying, funny and illuminating, making it an inspiration for us to do more as Catholics.

In keeping with Bishop Sheen’s lists of threes, here are three main themes of “Treasure in Clay.”

Sheen was raised on “an ethic of work.” He writes, “(T)he habit of work was one I never got over, and I thank God I never did.” No, he certainly didn’t.

He wrote more than 60 books, recorded countless hours of radio and television programming, traveled and preached and converted people worldwide, and never seemed to tire. It was all in pursuit of the goal of bringing souls to Christ.

Bishop Sheen promised at the beginning of his priesthood that he would pray a Holy Hour each day in front of the Blessed Sacrament, and considered spreading this devotion his greatest achievement for Christ. It reminds me of Mother Teresa’s answer to a question, “Why don’t you spend less time in prayer and more time in active work helping the poor?” Mother responded that without much prayer, their good work would not be possible.

Bishop Sheen himself believed that his Holy Hour helped him to do much good for Christ and avoid losing his zeal for souls.

Bishop Sheen titled the book, “Treasure in Clay” from 2 Cor 4, “But we hold this treasure in earthen vessels, so the surpassing power may be of God and not from us.”

Sheen draws a parallel between the priesthood and the ancient oil lamps for worship.—Priests hold the light of Christ, yet are fragile; true not just of priests, but of all Christians.

Bishop Sheen, especially in later chapters, written toward the end of his life, freely admits his flaws. What’s beautiful to read through these pages is how God still used him as a powerful vessel for spreading the light of Christ.

Some, but by no means all, of memoirs written in recent years can be dreadful to read. The authors freely mix fact with fiction, and write in a kind of forced, sarcastic realism that requires unpleasant moments to be rehashed in vivid, if not necessarily accurate, detail. There’s none of that in “Treasure in Clay,” and so to modern readers Sheen’s enthusiasm and optimism can be almost disconcerting. Ultimately, it’s refreshing.
Posted by Nancy Piccione at 7:28 AM