Today I'm working to finish my February column for The Catholic Post, and I've so enjoyed watching the March for Life coverage from Washington, D.C., on EWTN when I head to the kitchen for lunch or water.  There's one reason to be glad for cable television.

Today, I kept TweetDeck, a Twitter program, running, since the March is going on.  The hashtag #MarchforLife has been steadily growing throughout day, and nearly every second, sometimes more, a tweet will pop up on my screen with the hashtag #Marchforlife.  There are so many great ones from teenagers via text and others via Blackberry or iPhone at the March itself, like, "all life is presh" and "a person's a person, no matter how small" as well as some of the cheers they are saying, like "At the #MarchforLife right no. People are chanting "#Obama, your mother chose life."

I thought at one point, I bet this is a "trending topic" on Twitter, so I checked that, but so far, every time I do, it's not listed.  Why, Twitter?  I don't want to claim Twitter media bias or anything, but it's almost hard not to.   So I subscribed to the hashtags that are "officially" trending, like #CommunityManagerAppreciationDay and #NationalPieDay (really? and #marchforlife is not?) and let me just say that they are in now way as "busy" as #marchforlife.  So even thought Twitter is not listing #marchforlife as trending, I'm telling you, it is trending, big time.

Because of that, and in honor of all the great people (mostly young, you can see them live on EWTN!) at the March for Life, I wanted to list a few quick books that are worthwhile reading

1.  Angel in the Waters by Regina Doman, illustrated by Ben Hatke For children, nothing beats Regina Doman's Angel in the Waters, her picture book about the life of an unborn baby, with luminous illustrations by Ben Hatke.  You can read the book online at Angelinthewaters.com/, but there's nothing like sitting on a couch reading it to your favorite young person.  I dare you not to choke up when you read it. 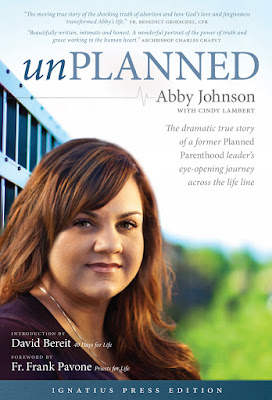 I reviewed Unplanned: The Dramatic True Story of a Former Planned Parenthood Leader's Eye-Opening Journey across the Life Line, last February, and it is worth a read if you have not and a re-read if you have.  Johnson was a Planned Parenthood clinic director, and leaves it all after seeing a first-trimester baby jerk away from the instruments as she assisted during an ultrasound-guided abortion.  I  interviewed Johnson about her book and work here.

As I wrote in my review, "This fine book speaks volumes about the power of love and prayer to overcome darkness and despair. Johnson writes that she was 'loved from one side to the other.'  Reading Unplanned  will make readers want to be that kind of love and prayer in their own communities.

3.  Won by Love:  Norma McCorvey, Jane Roe of Roe V. Wade, Speaks Out for the Unborn As She Shares Her New Conviction for Life  by Norma McCorvey 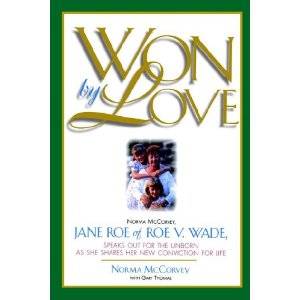 I had forgotten about this book until a friend tweeted over the weekend, " Want to know more about Roe v Wade? Why don't you read about it from Roe herself?" with a link to Norma McCorvey's website, Roe No More.  Norma McCorvey was the plaintiff in the Roe v. Wade case, but writes about how she was tricked into it, and all that ensued--addiction, abortion clinic work, conversion, healing.  Powerful, powerful stuff.

I read Won by Love last year after I read Unplanned and wanted to read or re-read other abortion conversion stories.  I found Won by Love to be somewhat less "polished," but no less powerful or moving because of it.

During the late 1980s and early 1990s, when I worked in the pro-life movement in Washington, D.C., I often encountered Norma McCorvey with her firebrand and rarely-out-of-the-spotlight lawyer Gloria Allred.  I remember at the time thinking that I felt so, so sorry for Norma McCorvey, as she just seemed lost and used by those around her.

This is an aside, but I usually felt sorry for most of the people on the pro-abortion side, as many were wounded and not healed, and there was always a pervasive sadness there. Once, a woman working for NARAL (we were always friendly to each other) blurted out to me in a green room before an interview, "Well, I've had an abortion" as if I would condemn her, and I just said, "I'm so sorry.  I'm sorry you had an abortion."  What else was there to say?

But with Norma McCorvey it always seemed especially sad, and that she was so deserving of love.  Reading Won by Love made me weep because she finally discovered a healthy, life-giving love.  Lots to ponder and be grateful for in reading that book.

I'm realized now I've never read former abortionist Bernard Nathanson's The Hand of God, and I have to remedy that this year.   There are probably other books I'm missing here.

What are some of your favorites?

Posted by Nancy Piccione at 2:40 PM