"You Know, You Could Name Your Son After Fulton Sheen": Guest Post

Even though it is no longer September, I still have a number of stories to share from those who love Arcbishop Sheen, so this will continue as a regular feature here at Reading Catholic.

Today's guest post is from Michelle Rebello, who lives with her husband Cliff and five children (teenagers down to 4 years old) in Peoria.  I've known Michelle for years, and readers here may know her as the person who had the inspiration for the Rosary Victory Project (and if you haven't signed up yet, please take a moment to go on over there and sign up, and don't forget the rosary is this Sunday, October 7).

Thanks, Michelle, for being willing to share your Fulton Sheen story here! 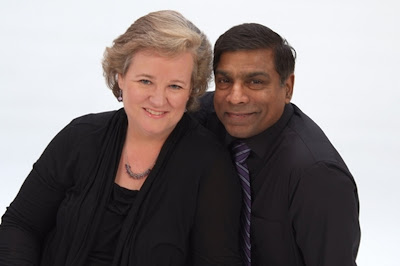 It was such a glorious celebration, that truly I thought all of heaven was looking down and rejoicing! That was what I thought of the Mass in 2008 celebrating the closing phase of Peoria's involvement in the cause for the canonization of Archbishop Fulton J. Sheen.

I was 9 months pregnant when I attended that Mass. at the Mass and also 9 months pregnant, with my son's Confirmation class. I had always enjoyed Archbishop Sheen's "Life is Worth Living" reruns on EWTN, but, like many my age, I was too young to fully appreciate him when he was alive. I sat amazed as I listened to Father recount Sheen's life, including many funny prophetic episodes, and was quite impressed.

"You know, you could name your child after him," I heard inside my head.  It was curious, but very clear.

"You're right," I found myself replying, "I could. Let me see what Cliff thinks." (My husband, Cliff, watched the Mass later on EWTN and concurred that we should name our son after him.)

Three days later, Matthew John Fulton Rebello was born in Peoria, two weeks early. He could be the first person named after the Archbishop in his home diocese.  Matthew was born just three days after Sheen became a Servant of God.

Matthew was the fruit of much prayer since he was born a few days shy of my 44th birthday, after we had already had four living children and four miscarriages.  I had prayed that God would send us another child---a son--- and that perhaps this child could become a priest.

A woman known to the Archbishop had told us how Sheen used to be a support to her while she raised her five children. She remarked that we need more holy priests to help another generation of families. Sheen could be continuing his legacy! Now, under the watchful care of the Servant of God (now Venerable) Archbishop Sheen, I can't think of a better person to intercede for our child!