I have been a bad Twitter user in recent weeks (For those of you on Twitter, I'm @ReadingCatholic and I'd love to connect with you there).

I've been on Twitter very rarely lately, even with the excellent TweetDeck desktop. Officially, Twitter can be a time-waster, but when I am there I invariably learn some great things from the links people share.  Lately, I've been feeling too "busy" and harried with my to-do list, both online and off, to be able to spend any time on Twitter, or figuring out Pinterest, or any of the other social media goals I have.

But last Friday, I was procrastinating/trying to get my writing juices flowing, in the hopes of finishing a post on Advent books, when I decided to spend a few minutes on Twitter, just checking in and tweeting a few things.  I retweeted some great articles shared, and also an article from the last issue of The Catholic Post about my friend Amy Dyke, the new NFP coordinator.

One of the articles I saw tweeted was "Who Is Your St. Andrew?"  It's well worth a quick read if you have a minute. 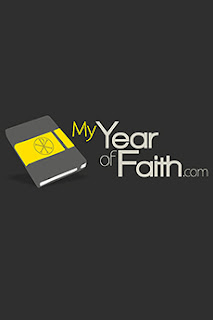 The article was posted on a site called "My Year of Faith," and in exploring that I discovered that it is actually an App called "My Year of Faith" produced by Little iApps.  I've written about Confession, one of the first Apps produced by Little iApps, as well as one of their Novena apps here.   I really do use these Apps to aid in my own prayer life, as well as that of my kids.  I'd have to say that  the Universalis App on my iPhone is my most-used App, but I do use fairly often the various Little iApps that I have.

I've just downloaded My Year of Faith (a bargain at 99 cents) so I can't give a review yet, but I like what I see in the iTunes description and since I have found apps by Little iApps to be useful, well-designed and edifying.