John Cardinal Newman: A Blessed for Our Times 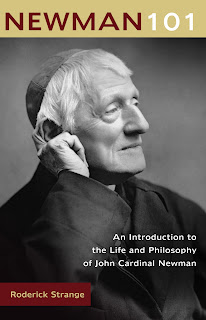 Here is my review of Newman 101 and other Newman books.  This will appear in this weekend's print Catholic Post.  I invite your comments, and check back all month for lots of Newman links and other discussion, including an exclusive Q&A with Newman 101 author Roderick Strange.

John Cardinal Newman is truly a blessed for our times.  The more I learn about him, the more impressed how his writing and his life were groundbreaking in his time and much needed in ours.
Newman, who will be beatified by Pope Benedict XVI in Birmingham, England on September 19, is famous for many things:  his prolific writings & sermons; his prayers & poems; his founding with others of the Oxford Movement to reconcile the Anglican Church with Rome; and for simply being one of the most famous English converts to Catholicism.
I had always considered Newman to be read mostly by theologians and intellectuals, but not very accessible to the rest of us average lay Catholics:  in other words, not my kind of reading.
Newman 101:  An Introduction to the Life and Philosophy of John Cardinal Newman, by Newman scholar Fr. Roderick Strange, changed all of that.  Fr. Strange has distilled down Newman’s thought and life into a very readable and engaging story.
The book runs roughly chronologically through Newman’s life, with chapters on areas that intersect Newman’s life & writing, such as Mary, the Mother of Jesus; Seeking Church Unity; and Witness to Holiness.
Fr. Strange quotes freely from Newman, so the reader can “hear” Newman’s voice.  At the same time, Fr. Strange details how much he has been influenced by Newman in his writing and in his ministry as an Oxford chaplain, among other roles.
What Newman 101 makes clear is that Cardinal Newman is so relevant today because he has an incredibly sensible, intelligent approach that avoids a variety of extremes when it comes to theology and devotion.  Reading this book makes me wonder what gifts and guidance Newman could provide for the 21st Century Catholic Church at a time of great change and conflict.
Newman 101 is full  of “quotable quotes” from Newman (some of these will be featured and discussed on the Catholic Post Book Group blog).   Here’s one of Newman outlining his belief in an active laity:
“I want a laity, not arrogant, not rash in speech, not disputatious, but men who know their religion, who enter into it, who know just where they stand, who know what they hold, and what they do not, who know their creed so well, that they can give an account of it, who know so much of history that they can defend it.”
Newman’s belief in a strong, active laity was virtually unheard of in his time, and brought him the censure of bishops and others.  Reading it today, we can see both his courage and the challenge he sets out for us.
By studying the life of holy people like Cardinal Newman that we can learn more about the ways to have this active, charitable faith.  I am grateful to Fr. Strange for presenting the life of Newman in such an engaging way that the Catholic layperson is not put off by the challenge, but wants to take it up in the 21st century.
Some other books about and by Newman:
*John Henry Newman by Avery Cardinal Dulles, himself a great convert and great theologian, was written in 2002.  This slim volume gives a quick biographical sketch, then covers Newman’s thought on various issues, i.e. redemption, justification and sanctification; the proof of Christianity; the role of the laity; the church.  Dulles interestingly compares Newman’s view of the role of the university (primarily as an  intellectual formation) with John Paul II’s view (the university should fully form the human person).
*Apologia pro Vita Sua, probably Newman’s most famous book.  The title means in Latin, “A defense of one’s life”.  The book was written about 20 years after his entry into the Catholic Church;  it began as a refutation of an Anglican clergyman’s attack on Newman, but ended up a beautifully written spiritual autobiography.
*I know Meriol Trevor from her children’s chapter books like Sun Slower, Sun Faster and The Letzenstein Chronicles, but her acclaimed two-volume biography of Newman, The Pillar of the Cloud and Light In Winter are exhaustive and extremely well-written.
Join the discussion!  Visit the Catholic Post Book Group at www.catholicbookgroup.blogspot.com throughout this month for quotable quotes from Cardinal Newman, an exclusive interview with Newman 101 author Fr. Roderick Strange, and Newman links and clips around the beatification of Newman on September 19.  Visit the blog to share your own impressions of Newman, his works and books about him.
Posted by Nancy Piccione at 7:00 PM