Following is the feature "Meet a Reader" that appears on the monthly book page in the print Catholic Post.  This month we feature Monsignor Richard Soseman.  He's been a friend of our family for many, many years, and I'm so glad to learn more about his favorite books and why he's a reader.  I think after reading his take on it, I'm ready to tackle Don Quioxote.  Anyone else with me? 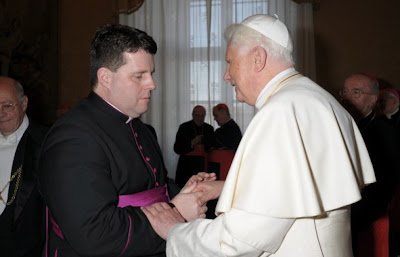 Meet a Reader:  Monsignor Richard Soseman
How you know me:
I’ve been a priest of the Diocese of Peoria since 1992; I was a Judicial Vicar for 12 years and Pastor of  St. Mary of the Woods Princeville for 10 years.  I’m now at Congregation for the Clergy, Vatican City.
I also serve as the Episcopal Delegate for the Cause of Beatification of the Servant of God Archbishop Fulton J. Sheen.
Why I love reading:
When we were kids, bedtime was at 8, but we could read until 8:30. We also went to the Library Club Summers at the East Moline Public Library.
Sylvia Standaert, at St. Anne School, East Moline, (now Our Lady of Grace Catholic Academy) was a real inspiration, and guided us in selecting books in First through Third Grades, so we could appreciate and understand the books we were ready to read. I remember being judged ready to read “Farmer Boy” by Laura Ingalls Wilder and being very excited.
I come from a family of readers, from my Father, who loved Zane Grey as a teenager, and read often in his spare time, to my Mom who still enjoys a good novel, amidst quilting and visiting with her great grandchildren. My eldest brother read a lot of non-fiction, my older sisters preferred novels. My brother Gary’s favorite author was Homer. He reads a lot of novels, but there is almost always a volume of Plato or nonfiction on his reading table. So, I suppose I come by reading naturally.
What I’m reading now:
Nathaniel Hawthorne: The House of the Seven Gables. We have to rediscover old classics, and I really enjoy 19th century novels.
Pope Benedict XVI: St. Paul the Apostle
Fulton J. Sheen: Old Errors and New Labels
Luigi Pirandello: Enrico IV (Play) I find fascinating Pirandello’s interest in examining the interplay between reality and fiction.
I also enjoy the mystery novels of Lawrence Block, whose flawed and sometimes criminal characters nonetheless follow a rigid moral code.
My favorite books:
Kristin Lavransdatter by Sigrid Undset. A beautiful and exciting epic trilogy of medieval and Catholic Norway, Kristin Lavransdatter is the life of the heroine from youthful indiscretion to elderly reflection.
Introduction to the Devout Life by St. Francis de Sales is possibly the best guide for development in the spiritual life ever written.   It’s so practical and full of examples. We say we love God. Don’t we want to learn all we can about Him through growth in the spiritual life?
El Quijote by Miguel de Cervantes Saavedra.  The first modern novel, Don Quixote is so chock full of fun, adventure, and literary technique that it is hard to put down. I first read parts of the novel at Alleman, and for a semester while studying my Masters at Marquette. It is said that a person should read this novel at least three times, as a youth, in middle age, and when elderly. Because of this, for years I gave Don Quixote to students at the High School Graduation. I hope they read it.
Book of Ruth from the Bible
Since I’m part of a large family, I have always enjoyed this story of family loyalty despite great difficulties. Beautiful, especially when Ruth says to Naomi: “whither thou goest, I will go; and where thou lodgest, I will lodge: thy people shall be my people, and thy God my God.” It’s such a great reminder of human loyalty and of God’s great love for His people.
Posted by Nancy Piccione at 7:00 AM