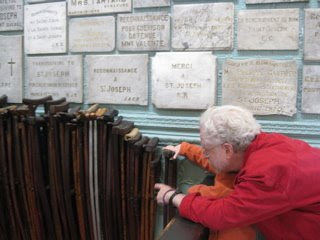 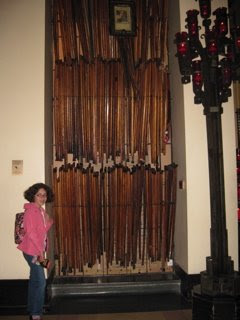 In summer 2009, our family had the opportunity to travel to Canada, and some of our best memories were from visiting, St. Joseph's Oratory in Montreal, and the Shrine of St. Anne de Beaupre , outside Quebec City. With the canonization of St. Andre Bessette (who built the Oratory) this month, I was inspired to re-post here what I had written about the crutches in June 2009. As we wind up our discussion of Beyond Blue this month, and learning about healing, I think it's an appropriate reflection.

In both places of pilgrimage, crutches figured prominently.

I'm sure I snapped more than a couple dozen photos of the crutches left behind by those healed through the intercession of St. Joseph and St. Anne. Now I only have a few because I've been fairly ruthless editing the photos we took in Canada. And I experienced such involuntary and powerful emotions when seeing them.   So I've put up a couple of the photos I took that remain.

At first, or at some point after seeing them I thought, could there really be this many people who are cured and no longer need their crutches?  How many people really need crutches these days?  I guess it was different many decades ago when these shrines were being constructed.  But still,  all these people healed?

And yet, you see the hundreds of well-used crutches and canes all over the place, and clearly people left them behind.   Even with my skepticism, at least for me, I continued to have a very strong emotional reaction, my eyes tearing up, when I would catch sight of the crutches as we spent our time at the shrines.  I think part of my intellectual reaction was from my mom, who was pretty practical about these kind of things, almost to a fault.  But still the tears flowed.

An old friend from DC wrote on my Facebook (after I mentioned we were going to St. Joseph Oratory) that she had visited there years ago and, seeing the crutches, was inspired to pray for her own healing.  And I didn't see her note until after we had been there, but I had the same thought.  I couldn't even articulate at the time what I meant by that.  It was just a wordless prayer for healing and grace.

Now, with some time away from the experience, and getting a chance to reflect on it, I recognized that what resonated with me was the common human struggle with brokenness.  For some it is an obvious problem--a physical disability.  Some are more open about their struggles with brokenness--I'm grateful for the blogs I can visit where people share their struggles and their faith journeys.

But even if we are more private about it, or it is not obvious, human life involves struggles and brokenness, even amid joy.   What is important is to be loving and forgiving to each other as we recognize that.  On our own we don't have that kind of love and forgiveness.  That is why I'm so grateful for the grace and supernatural love given freely by Jesus, however imperfect I am at accepting that grace and love.

I was in confession last week with an African priest visiting our parish, and I have to "confess" I was a little concerned, because the last time I went to an African priest for confession (a number of years back), my penance was-- an entire Rosary.  I can laugh now, but in my shock, I had to ask him if that's what he really meant.  Now I know a Rosary isn't terrible (Mary, Mother of God, please still love me for even writing that!).  But for soft old American me, going to confession to very kind American priests, I'm used to a couple of Hail Marys, and some good advice.

But this time during confession (with a penance far less than a Rosary, I might add), the priest at one point said, "dear daughter of the King," and of course my eyes teared up.  I am a daughter of the King--we are all children of the King-- and His grace and healing is available to us.  Let us be given the hearts to know that.
Posted by Nancy Piccione at 7:00 AM