"Jesus Has Been Making This Journey With Me": Guest Post for Sheen September, Mary McKean

As I was writing the title for this post, it occurred to me that "Sheen September" is a good name for this month on Reading Catholic, as the focus is many things Sheen.  Today, I'm honored to share the first of  several guest posts by Sheen aficionados.  Mary McKean is the leader of  the women's Sheen Book Group of which I'm a member, and I've known her for more than a dozen years, and as you will see, she is a longtime Sheen fan.

Mary McKean and her husband, Pete, have been married 35 years and are the parents of  eight children ages 33 to 16, and grandmother of 16 (and counting), where they are members of St. John the Baptist Parish in Bradford.

Mary's been a parish organist for 40 years (she started as a young teen!).

I also want to add one fact I've known for years about Mary that I find so cool: she and her husband were in the Peace Corps in Ecuador as newlyweds in 1977.

Mary, thanks for writing this guest post and sharing your perspective on Archbishop Sheen! 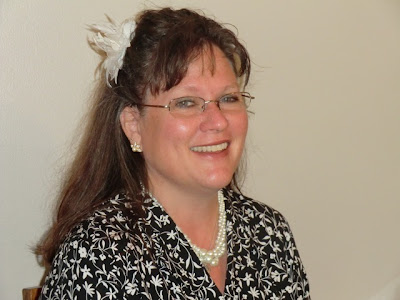 As a mother and grandmother of a large family I haven't always had time to read.  Now that my children are nearly grown, there has been an awakening in me of things set aside, and dreams unfulfilled.  I have discovered the joys of pursuing in-depth study of the Bible, and of getting to know Our Lord personally.

For quite some time I have had a desire to be a participant in a Catholic Book Club.  I wanted to learn my Faith better, and to read books that had some depth.  I have searched the area many times, but have never discovered any such group.  I joined my local library's monthly book club, and while I enjoyed it, I still felt that something important was missing.

I became a member of the Marian Catechists, which is an apostolate within the Church, whose sole purpose is to share the Faith.  I decided that now was the time to do something about this desire.  I called some friends I thought might be interested in exploring the depths of our Faith, and we set a date to begin.  I asked them each to bring a book that they might be interested in reading during the year.

Imagine my surprise when nearly everyone brought a book by Archbishop Sheen, myself included!  Considering the fact that we are in Archbishop Sheen's home diocese, and that he was just declared venerable, we decided to dedicate the entire year to his books, studying a new one each month.

What a year it has been!  I have gained so much, and have learned to love and appreciate this man.  I am always so impressed by the insights he brings to each book....insights that come from wisdom, not necessarily knowledge.  How, I thought, does he penetrate into the human mind, and understand its workings when he has no background in psychology?  I concluded that there could be only one reason:  the holy hour he made before the Blessed Sacrament each and every day of his priestly life.

I think Jesus has been making this journey with me, touching my heart with His Spirit.  Each book we've read has spoken to me, and been just what I've needed at a particular moment.  When troubled with some personal trials, Sheen's book Peace of Soul brought me comfort and understanding.  After several weeks of suffering, I was reminded in St. Therese: A Treasured Love Story, of the power of the cross when offered to Our Lord for others. My love and devotion to Mary was strengthened and increased by a study of The World's First Love.  There are many other examples.

My family and I live on a farm just ten miles from the one where Fulton Sheen worked summers helping his grandparents.  I grew up listening to his tapes, and my husband spent many evenings with his grandmother watching 'Life is Worth Living' on television. My mother read Three to Get Married as a young married woman.  All of these things have made the archbishop feel especially close and approachable.  I love his sense of humor, his warmth, and love of life. He has certainly broadened and enriched my life.
Posted by Nancy Piccione at 7:00 AM