Sheen Mass of Thanksgiving, Part I: Before the Mass

As I've mentioned already, the Mass of Thanksgiving for Archbishop Fulton Sheen being named Venerable held here in Peoria on Sunday was truly amazing.

I wanted to share some personal photos from the morning, some taken with my iPhone and some (that would be the really good ones) taken by my husband Joseph on his Canon.  Because there is so much to share, this will be split into several posts.

My goals here are: 1. to introduce you to some Peoria diocesan people who are worth knowing, 2. to explain some Catholic culture and the interesting world of papal orders, and 3. to have fun exploring the sights, personalities and emotions around the Mass itself.

First, there was a lot of media interest in the Mass.  Here is Bishop Jenky being interviewed by local newscaster Anna Yee (here's the link to her story): 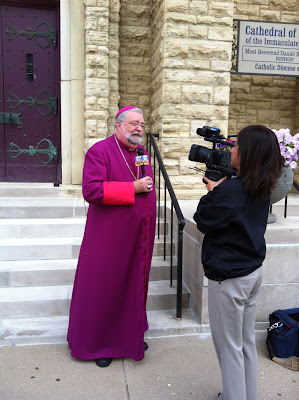 Our family arrived early for the Mass, and I dropped off our children in the St. Thomas More Chapel, which held overflow seating for the Mass.   Most of St. Mary's Cathedral was filled with ticketholders, and I'm not sure how those were obtained, but there was room for various people in overflow places.  People I knew who were there were split pretty evenly between those who had tickets and those who didn't.

Another family agreed to let our kids be with their family, since Joseph and I were to be in the procession.  I'm so grateful to them (hi Lucy and Rick!), because although our kids are old enough to be at Mass by themselves, it was nice to know they were covered.  I was also relieved that also in the Thomas More chapel  was another family that are pretty much family to us. 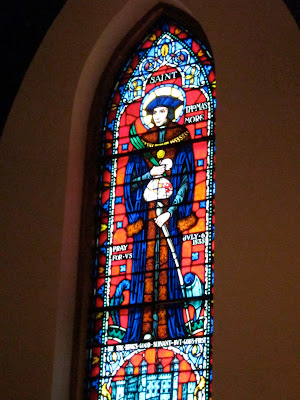 Here's a stained glass portrait of St. Thomas More, just outside the chapel itself.

The reason that Joseph and I were in the procession is that we are both members of the (yes, this is the real name) Equestrian Order of the Holy Sepulchre of Jerusalem (EOHSJ hereafter).  You can read about the founding of the Order here.

How did we come to be members of this order?  Nine years ago (interestingly, when I was pregnant with our youngest), our former Bishop, John Myers, nominated us.   He is now the Archbishop of Newark, NJ, but was in Peoria for the Mass and, a few days before, to celebrate 25 years as a bishop. After we accepted, we had our investiture with a large group at the cathedral in Indianapolis, where the annual conference was held that year.

I could write tons about the EOHSJ, but since that would be a completely new post, I will resist.  Among the many expectations, I consider three to be most important and what we focus on:  to pray daily for the peace of Jerusalem, to support Christians in the Holy Land, and to make a pilgrimage to the Holy Land.  Joseph and I have not yet made our pilgrimage.  My desire is for our whole family to go on a Footprints of God pilgrimage (hosted by Steve & Janet Ray) once all our kids are teenagers.  I keep announcing it and putting away funds for it, so I hope it will really happen in a few years for us.

The either cool or slightly awkward part of being in EOHSJ is that we have ceremonial dress. 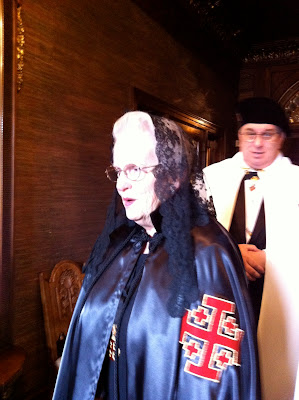 Here's another one of the Ladies in her ceremonial robe and behind her, one of the Knights in his ceremonial robe.  This particular Lady's name was Judy and she has a great sense of humor, so we had a lot of fun that morning.

Allow me a short digression here:

I've been in Facebook and real-life conversations with young mommy bloggers about mantillas, as a strangely large number  have written or talk in the past few years about wanting to start wearing a mantilla or headcovering at Mass.  I find this completely fascinating, since I don't share the desire at all.  I share my own story that, as someone who is occasionally required to wear a mantilla, I don't recommend it for regular use.

That is just me.  Intellectually, I'm okay with whatever a woman wants to do.  But at the same time, the conversations have been pretty candid (with me saying things like, "No! No mantillas! No!").  That is definitely a completely different post, and I think Simcha Fisher or some other smart young blogger has already covered this topic and related issues in depth.

So as we were getting into our robes before the Mass, I tweeted to @BonnieEngstrom (who was in one of the online conversations along the way) something along the lines of "Putting on my mantilla for you! :-)"  My awkward attempt at mantilla humor. 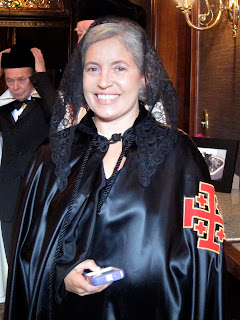 Here I am, in mantilla, ready to process.  Notice my iPhone ready to snap photos.  Also notice the Jerusalem cross on the robe, an ancient symbol and one of the main insignia of the Order.

One nice part of being in EOHSJ is that when we are participating in a liturgy, we process and get to be with the celebrants beforehand, usually the bishop and some variety of priests and monsignors. Our family has a lot of priest friends, and so this is a nice chance to catch up and visit. 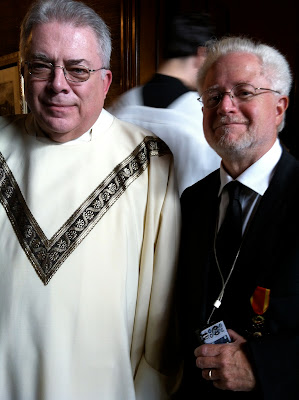 Here is Joseph with Monsignor Stephen Rohlfs, now rector of Mount St. Mary's seminary.  He's a priest of the diocese of Peoria, and one of Joseph's oldest local friends and theologian mentors.

Okay, now this is going to get confusing, if you weren't confused already.  You will notice that Joseph is not wearing the EOHSJ ceremonial dress.  That's because he actually outranks us EOHSJ folks.

You can read all about the Order on the Vatican website, and no, I don't understand it very well, either.   Generally, people who have a long history of service to the Church are named to the Order.  Joseph received the honor at a relatively young age, and it's my theory ( but keep in mind here I'm a lay person and not an expert here, even though I'm his wife and biased), some of it had to do with his working prayerfully and diligently as a theologian and lawyer in Catholic health care ethics and mission, a challenging field. 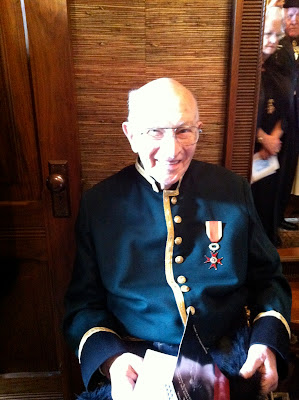 Here is Dr. Clement Cunningham in the ceremonial dress (minus the hat) for the Order of St. Gregory the Great. Dr. Cunningham is a local Peoria diocesan hero and supporter of so many wonderful local and national Catholic efforts. 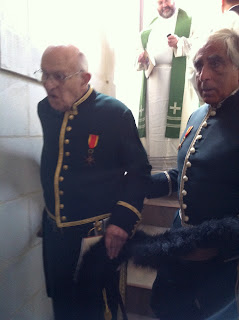 Here is Dr. Cunningham being helped through the corridor between the rectory and the cathedral by the kind and dear Dick LaHood, a fellow Knight of St. Gregory the Great.

One of the tweets I sent just before the Mass was something like, "It's really loud in here, but it's not me, but Father Apostoli and all the priests talking."

I meant it in a lighthearted way, and really, everyone was talking, not just Father Apostoli (sorry to single you out, Father!). My goal was to give a feel of what it was like to wait for the procession, behind the scenes.  The reason for the noise is there is a small corridor between the Rectory and the Cathedral, so with several dozen people talking, it got pretty loud.

I will stop here.  Part 2, coming tomorrow, will cover the Mass itself and what happened there.
Posted by Nancy Piccione at 8:10 AM