Print is Alive and Well: My CPA Midwest Wrap-Up

Last week, I had the great good fortune to attend the Catholic Press Association Midwest Regional Conference, hosted here in Peoria.  The editor of The Catholic Post, Tom Dermody, and his staff at The Catholic Post organized a terrific two-day meeting, and I for one came away with many great ideas and insights.

Regular readers of Reading Catholic will note that I usually refer to Tom as "my editor," but I started to feel strange about that, as if being "my editor" is his only job, working on polishing my monthly column for the print edition of The Catholic Post and giving me advice about writing and other things.  But however much it may surprise you (she says jokingly), he is actually really busy, whether in putting out a newspaper every two weeks, or organizing regional conferences.

That's one point of this post: to acknowledge and praise the work of print journalists in Catholic press, and share with my online comrades the amount of work that goes into print publications.  Back before there was an Internet, I worked in newspapers, magazines, and then in media relations during the high-tech days when we used to fax press releases to reporters.

Because I now work primarily online and love so much about it, I had forgotten the intense amount of effort goes into print publications, until I got the chance to be with those print journalists for several days.

My ultimate message for Catholic people active online?  Keep doing it, but at the same time be sure that you are supporting and reading print publications.  If you don't already subscribe to your diocesan newspaper, please take a moment to do so.  Here's where you can subscribe to The Catholic Post, for a start.

There are also many worthy national print publications.  Having those "strewn" around the house for kids and adults to find is a way to create a Catholic culture in your house.

One real-life example:  Several months ago, my 11-year-old was delighted to see Pysanky eggs featured on the cover of the beautifully-produced  CNEWA's magazine One,  since we enjoy doing Pysanky during Lent.   I'm not sure how she would have seen that otherwise; even though the magazine is online, I wouldn't necessarily have found it or linked it, and she's not online like we grown-ups are.  Because we give to CNEWA, we get the magazine, and it's "around" for people in our house to discover.

Now on to the CPA Midwest and some of my snaps from the two-day conference: 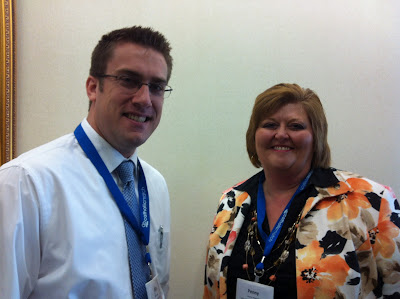 Here is Billy Atwell, director of Communications for the Diocese of Venice, Florida, and Penny Wiegert, editor of The Observer, newspaper of the diocese of Rockford, Illinois. Penny is a true force of Catholic media, being a past president of the national Catholic Press Association.  She was great to meet and hear from, as were so many others, from Chicago to downstate Illinois, to St. Louis, to Iowa to Indiana, Florida and Washington, D.C. 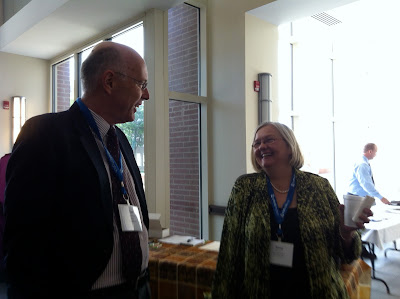 Here is Tom Dermody with Sonia Nelson, advertising manager of The Catholic Post.

The general session was "Communicating Across Today's Generations" by Dominic Perri, a consultant to the USCCB and others.  I don't have a non-blurry photo of Dominic, but his presentation was very informative about how different generations experience Church life.  What was most helpful in experiencing this firsthand was when Dominic broke us into generational groups each group we answered questions about what we wanted other generations to know about ours, what we wanted to know about other generations. 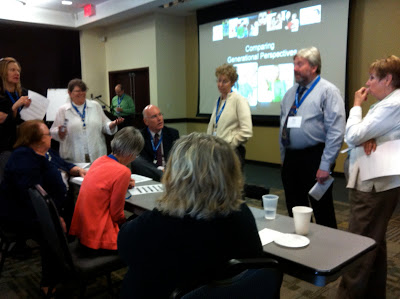 Here's a blurry photo of the baby boomers working on their answers.

Later that day I attended two great breakouts--one by Tammi Finch of a local web company, Web Tech Services on social media--I have tons of take-aways from that; and one by Bob Gilligan, executive director of the Catholic Conference of Illinois, on "When Politics and Religion Intersect." Bob's talk was both very thorough but rather depressing (sorry, Bob!), since he explains so much of the way things are going from a legislative perspective.  Ultimately, there is hope, because there are good people in Springfield and Washington, D.C. who work for Catholic values and rights.

Before dinner, Monsignor Stanley Deptula, celebrated Mass for the attendees in the St. Thomas More chapel of St. Mary's Cathedral for the convention-goers. 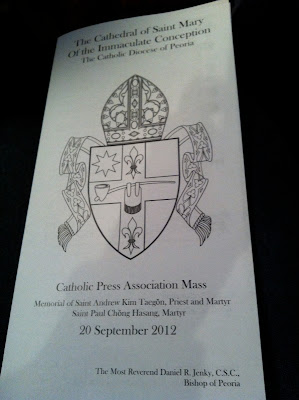 Monsignor Deptula shared that that day, September 20, was the anniversary of Archbishop Fulton Sheen's ordained in this very cathedral--St. Mary's Cathedral. 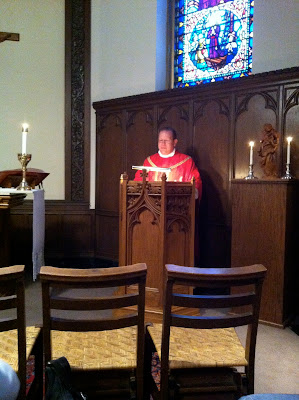 After the Mass and a walk through the cathedral, we boarded a Peoria Charter Coach bus, and Pat Kellogg, who is retired from the diocese, gave us a wonderful short tour of downtown Peoria and Grandview Drive on our way to a terrific dinner at a great local restaurant.  Here's a kind of dark photo of Pat "touring" us: 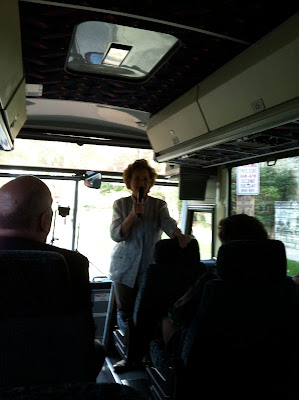 The next day's focus was on Archbishop Sheen, as Monsignor Deptula, executive director of the Sheen Foundation, gave a funny and incisive presentation on "Lessons from a Great Catholic Communicator" about the life of Sheen and the cause for his canonization.  Everyone took copious notes and asked many, many questions during his talk.  Afterwards, Bonnie Engstrom, a nationally prominent blogger in the Peoria diocese whose son's healing is the "alleged miracle" put forth for Sheen's beatification, spoke about her family's experience.

I was tweeting from the conference (@ReadingCatholic on Twitter) because I had my laptop there and it was easy to do so while listening to the speakers.  In fact, tweeting an event is basically a form of taking notes, and is helpful in keeping me focused on what I'm hearing.  I tweeted for the first few minutes of Bonnie's talk, but stopped.

I had read through Bonnie's story before on her blog, but had never heard her speak in person about it in detail.  It was amazing, truly so.  I just had to close up my laptop and listen to and soak up all she had to say, and so did everyone else.  Wonderful.  The story of the alleged miracle told by Bonnie is remarkable and beautiful, and should be heard widely.  If you are in the market for a speaker for a Catholic event, please consider contacting Bonnie about it.  She had a room full of experienced journalists enthralled. 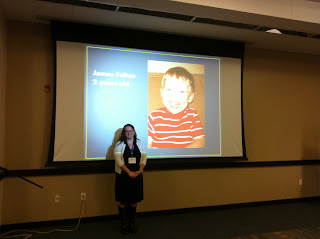 Afterwards, while we all snapped photos and talked with Bonnie in front of a photo of her son James Fulton, Tom Dermody (that would be my editor Tom Dermody) said the funniest line of the day, which I did tweet eventually:

Have you been to a conference lately?  What positive experiences and insights did you come away with?