Sheen Mass of Thanksgiving, Part 3: Wrapping Up and Keeping it Real

This is my final wrap-up post about the Mass of Thanksgiving for Fulton Sheen.  You can read Part 1 here about before the Mass (perhaps destined to be known hereafter as "the mantilla post"?), and Part 2 about the Mass itself here.

This is basically the keepin' it real edition, to explain some of the back story and to make fun of myself, share a family joke, and have an epiphany about online life and camaraderie and perspective.  I am definitely increasing the drama level here for effect, and I hope that works.  Perhaps it is only helpful to me, but I'm going to share it anyway.  Here it is:

No one tells me anything.

I'm not sure exactly how it came about, but since I'm from a big family, some of us became fond of complaining this to parents or other siblings, once we were mostly grown and away at college or starting careers.  Mom & Dad, you're going to New York to visit another sister?  Someone got into law school?  Someone has a new boyfriend?

All purpose response: "No one tells me anything!"

Fortunately this had become a family joke before most of us started having children, so we had a very strict unspoken protocol of personally talking to each sibling when a new baby was on the way.

And no other sibling could spill the beans.  This meant that to avoid awkward conversations around that time, if you had heard from a pregnant sister (or sister-in-law), you usually didn't answer the phone for a few days to be sure you weren't going to get a different sibling who might not have heard the news yet.  Which would be me because... pause for effect here... No one tells me anything!

These days my siblings and I use the expression with each other because we are all almost too busy to keep in touch.  It's also helpful to use if I am feeling left out about something with friends or those close to me, I  say that to myself, since it usually makes me laugh and realize that it's not the case, and I need to just plug on and be positive.

As perspective on what I'm going to share, keep in mind that I wasn't officially "covering" the Mass or the Sheen weekend events for The Catholic Post.  I'm a freelancer for The Post, writing my column and this blog. So I'm not in the know about every Catholic event, but I do like to sometimes write here on Reading Catholic about events from my own perspective.

So being out of the loop for me is not necessarily a bad or unusual thing--I've got my specialty here with books, and in general I like to stick to it.

My first "no ones tells me anything" moment when I found out that Lisa Hendey and a few other Catholic people I know online were coming to Peoria for the Sheen weekend.

I had another "no one tells me anything" moment after I saw late Saturday that there was some kind of reception at the Sheen Museum on Saturday night.  And there were Lisa Hendey and Alexis Walkenstein (of The Maximus Group), hanging out and having fun just a few miles away.

And what was I doing?  I was in my pjs, sprawled out with kids and dog, watching Love It or List It while also checking Facebook on my ancient iPad.  Nearby, my husband Joseph read something intelligent.  I am a morning person, so my brain shuts off around 8 p.m.  Love it or List It is just about right then.

I know this actually is exactly what I wanted to be doing then, but still... I can do that next Saturday night!  Tonight my online friends are having fun in the same area code as me.

Not only am I melancholic and insecure when it comes to online friends, but apparently I am also prone to jealousy and possessiveness.

Then I had my epiphany.

When you're feeling "no one tells me anything," remember: it's okay.  You're part of the family.

We are all part of the same Catholic online family, and I don't have to know everything, and neither do you.  If I don't know about some cool conference or some great reception (even in my own area code!), it's all good.

Just like my siblings are always my siblings, we are all family no matter what.

If you're in the Catholic online community, you're part of the tribe--there's no secret handshake or code.  (And if there is, you can just keep it to yourself, because that's not the tribe I'm talking about).  I'm part of this, and so are you, however small our impact or own little corner.

When I reach out to other Catholic in online forums like Twitter or seek guest writers or feature some great bloggers, online friendships grow and flourish.  Some day those may and have lead to real-life meetings and most won't, but we are all part of that same Catholic faith and support each other.

So if you are a Catholic blogger or Twitter person and feel left out or not in the loop when you see people posting photos or seemingly having a great time at a conference, or getting lots of comment or .....fill in your own blank here.  We all have our insecurities.  Just remember you're not alone, and I feel the same.

After my epiphany, I got out of my "no one tells me anything" mood (and my pjs) by Sunday morning when it was time for Mass.

Of course I was genuinely thrilled to see Lisa Hendey, who I haven't seen in several years.  She is just delightful and upbeat in person, as she is on her terrific Catholicmom.com, as well as her always-encouraging writing for Faith & Family Live. 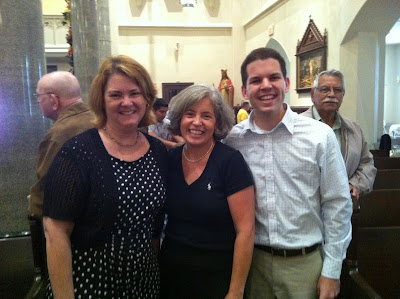 Here we are with the aforementioned Brandon Vogt, whose energy and output rivals that of Sheen.

I also loved getting to meet Alexis Walkenstein of The Maximus Group, who is just as cute and endearing in person as she is online, but curses, I didn't get a photo of her.

I also got to see a lot of local friends, some that I see often and some that I don't.  Quite a few have blogs that are featured on the sidebar here, Catholic, Local and Online.  Many of them have done their own excellent blogging about the Sheen Mass.  Here are just a few of the bloggers who were there, and please let me know me if I left anyone out, and I will update here.  I am linking to their Sheen Mass post if they have one:

*Britta of "By Prayer and Petition."

*Marie of "Help Them to Heaven."

*"Stumbling on the Way to Emmaus."

And Bonnie Engstrom of A Knotted Life.  Especially if you feel you may have had a tough day, head over to Bonnie's post about her family's experiences during the Mass. (Kind of makes me a little sheepish about those "no one tells me anything" moments).

As many know, their son James Fulton's recovery after 61 minutes not breathing after birth is what is technically called the "alleged miracle" being put forth for Sheen's beatification.

During the Mass, my husband asked me several times, "Where are Bonnie and Travis?"  I kept looking, but never did see them until after the Mass, but didn't hear about their travails with Travis' shirt and tie, nursing baby and so forth, until I read about it on Bonnie's blog.  Here's the photo I snapped of Travis and James Fulton after the Mass, Travis by this time being minus his more formal wear. 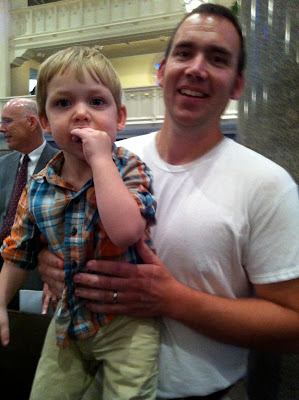 Hey! There's Tom Dermody, the editor of The Catholic Post, just behind James. I did get a photo of him after all.  Here is his CNS story about the Sheen Mass.

The Engstroms were also popular with the Catholic (and other) papparazzi. I couldn't resist getting a photo of that. 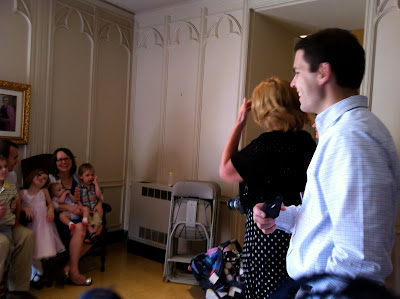 I also got to visit with the talented and energetic Brandon Vogt.  I even took a photo of him with Monsignor Soseman. 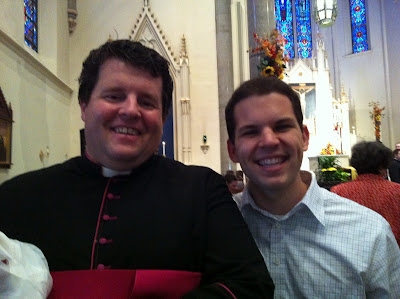 But remember,  Brandon, he was my friend first.

What's your best memory of the Sheen Mass?

Do you have an epiphany about Catholic online life to share?

What do you think about mine?
Posted by Nancy Piccione at 7:00 AM