Yesterday, in Part 1, I shared what happened before the Mass of Thansgiving.

Today, Part 2  is all about the Mass itself at the Cathedral on Sunday to celebrate local son Archbishop Fulton Sheen being named Venerable, one more step on the path to sainthood. 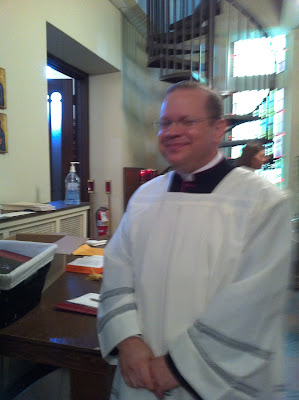 Oh how I wish this were a better photo of Monsignor Stanley Deptula!  Monsigor gave the terrific homily at this Mass to celebrate Fulton Sheen (here is the video link to that sermon), and he has been.  I snapped this photo in the sacristy as we were walking through to process through the Cathedral.  My photo of him giving the sermon is very far away, so this is the best it gets.  Monsignor Deptula has been on the forefront of Archbishop Sheen's cause, as it is near and dear to his heart.  The most popular tweet of Monsignor Deptula's sermon (that I saw later), was from Alexis Walkenstein of The Maximus Group, who tweets as @spokeswmn: "When God works a miracle, it is an expression of his love" - Monsignor Deptula.  Nice! 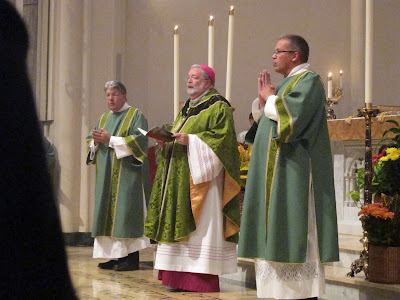 Here is the opening prayer led by Bishop Jenky. 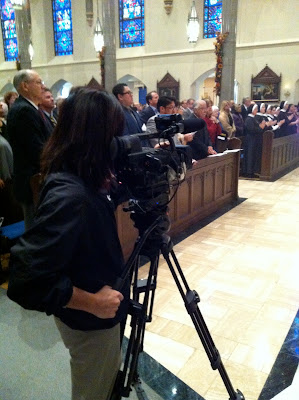 The Mass had a lot of media coverage.  I neglected to get a photo of a half-dozen photographers on the other side of the church from here, right in my sightline, but here is Anna Yee, a local newscaster, who filmed just beside where we were seated. 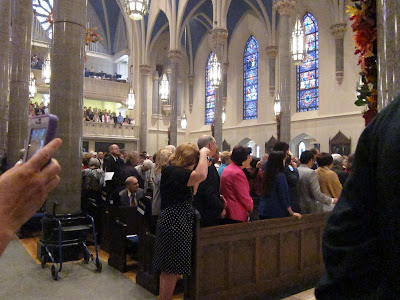 There was a lot of "Catholic papparazzi" present-- here is Lisa Hendey taking photos.  I tried several times to snap a photo of my editor at The Catholic Post, Tom Dermody, who was very active taking lots of photos, but was unsuccessful.  All of my photos of him are blurs.  Here is Tom's excellent CNS version of the story of the Sheen Mass.

After Communion, I noticed my husband reading some after-Communion prayers in a book. 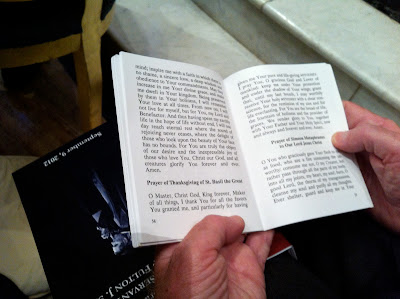 I read several of the prayers along with him, and then asked him to let me take a photo of the front of the book. 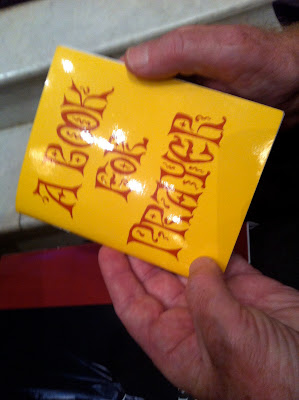 It's a small prayer book put out by the Melkites, an Eastern rite (but in union with Rome) Catholic Church, thus the different looking font on the front.  The prayers themselves are also very ... Eastern Catholic.  Here's a little more about the spirituality of it.

Interesting Eastern Catholic/Fulton Sheen trivia:  did you know that Fulton Sheen was something called "bi-ritual," which means he could celebrate both Roman Catholic Mass and Byzantine Catholic Liturgy?  You can read all about that here.

After the Mass, Monsignor Deptula explained more about the positio, the large box of materials that were submitted to the Vatican for Archbishop Sheen's cause.  Copies of the positio were given to various donors and supporters of Sheen's cause. 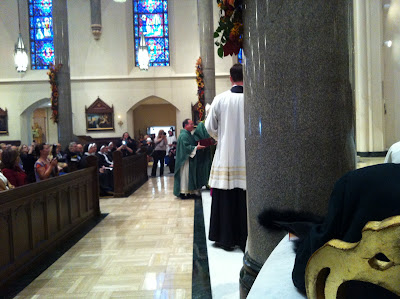 I was right behind a pillar, so it might be a little hard to see here the positio box (a small brown box) being given here.

Tomorrow, Part 3, will be a lot more lighthearted as I share an epiphany I had about Catholic online life through the course of the weekend.

Do you have any memories to share from the Sheen Mass?   I'd love to know how others saw the Mass.