During my college years in the 1980s, I was a (nominal) cradle Catholic, and fairly immersed in the college culture of the time.  I was especially drawn to various trendy, or what we called back in the day “politically correct,” ideas and philosophies.

Exhibit A: I thought Gloria Steinem, who spoke at our campus, was glamorous and made terrific sense.

I’m incredibly grateful for that speaker, who opened my eyes at such an early age of the high cost of “anything goes.”  But it was awful to sit through and to hear.

Mary Eberstadt’s Adam and Eve After the Pill: Paradoxes of the Sexual Revolution reminds me of hearing that speech.  This book is not enjoyable –in fact, reading it can be downright discouraging.  But it is a must-read in understanding, “the moral core of the sexual revolution (is) the abundant evidence that its fruits have been rottenest for women and children.”

Every single essay-chapter is important and stands alone.  It’s hard to pick out a best chapter, but “The Will to Disbelieve” is crucial in setting up the notion that society at large is largely ignoring the clear results of the sexual revolution, much the same way the “the moral facts about the Cord War remained disputed at the highest intellectual levels, especially on American campuses, until about two seconds before the Berlin Wall came down.”

Perhaps the only hopeful chapter of Adam and Eve After the Pill is “‘Pedophia Chic’ Then and Now” which outlines how just a few short decades ago, pedophilia was more in vogue and even defended in the public square such as mainstream magazine articles.  Ebertstadt writes that it is “a small case of small but real moral progress that bodes a little better for the youngest and most innocent among us, even as it confirms that the sexual revolution has made the world a more dangerous place for them.”

Hope may be hard to come by when reading Adam and Eve After the Pill, but hope and peace suffuse My Peace I Give You: Healing Sexual Wounds with the Help of the Saints by Catholic convert Dawn Eden.

In many ways, My Peace I Give You is a personal testimonial to the rotten fruits documented in Adam and Eve After the Pill.  As a child of divorce, Eden experienced sexual abuse in various settings, then as a young adult lived promiscuously to “take control” of her sexuality.  But wholeness and true happiness remained elusive. 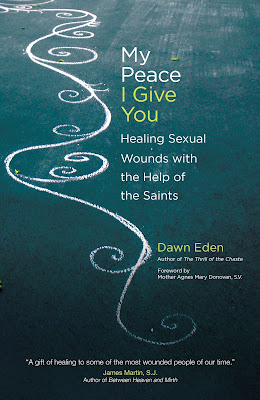 In Eden’s 2006 international bestseller, The Thrill of the Chaste, Eden wrote about discovering the appeal that modesty and sexual restraint offer, but had not yet come to terms with the legacy of abuse in her life.
During and after her conversion to Catholicism, Eden sees that healing from those sexual wounds is ongoing and a work of the Holy Spirit, through specific saints who provide solace on the journey.

As she writes to the many who are childhood sexual abuse victim, “I want you to know you are not alone, you are not forgotten, and you have more friends in heaven than you realize.”

My Peace I Give You is part memoir and part meditations on what the saints can teach us about wholeness of body, mind and spirit, even in the face of searing memories and experiences.

Some of the saints in My Peace I Give You are victims of sexual abuse; some are not; but in Eden’s heartfelt and careful reflection, all have something to offer those who have undergone abuse, or those whose hearts breaks for them.

This column appears on the book page of the print Catholic Post this weekend.  It's an interesting, I would venture to say providential, "coincidence," that this review appears here on the feast day of St. Maria Goretti.  Eden in particular has an insightful chapter in her book My Peace I Give You on this much-known but little-understood saint.
Posted by Nancy Piccione at 11:00 AM