Q&A on the "Broken" Series by Mandi of Catholic Newlywed


This month on Reading Catholic, I am determined to share some of the great recent resoures on human sexuality out there.  This will include blogs, podcasts, and other resources I’ve encountered as I reviewed for this month’s column on two great new books, Adam & Eve After the Pill:  Paradoxes of the Sexual Revolution by Mary Eberstadt and My Peace I Give You: Healing Sexual Wounds with the Help of the Saints by Dawn Eden.

Today, I’m honored to get a chance to introduce readers of Reading Catholic and The Catholic Post to Mandi, who writes a charming blog called, “Catholic Newlywed.”  Mandi began a series on her blog this year called “Broken,” that I want to share with The Catholic Post readers.  Mandi, thanks for your willingness to share, and for your great series that I hope even more people will discover.  Here's Mandi, her husband and daughter: 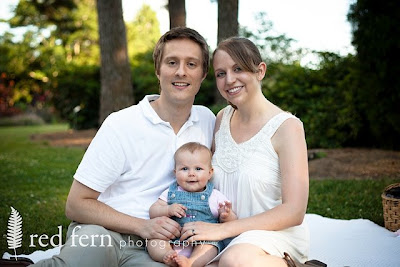 Q.  Tell Reading Catholic readers a little bit about yourself, your family, and how you began blogging.

I started my blog in late 2010, shortly after marrying my husband.  We had a long distance relationship, so when we married, I moved far away from my family and friends and was craving friendship with like-minded Catholic women.  Since then, we welcomed our first child, Lucia, last December and my blog is now a combination of faith, family life, keeping house, and the everyday musings of a Catholic wife and mother.

Q.  How did you get the idea for the “Broken” series?

I was in a “broken” relationship myself several years ago and continue to feel the scars it has left behind.  During the two and a half years that it lasted, I felt very alone and ashamed, without anyone to confide in.  In the time since then, I have realized that my experiences were not nearly as rare as I thought they were.  Slowly, I came to learn that many of the women I had daily contact with had been in similar damaging relationships, but we all felt isolated and alone.  “Broken” is an attempt to provide a channel for speaking out about these relationships.

Q.   What do you hope that women will take away from the “Broken” series?

I started “Broken” in hopes that it would be a resource for women to gain knowledge, advice, and strength from others who have been in similar damaging relationships.  I believe that had I had more access to “real life” stories from other women, I would have been able to identify my relationship as abusive before it had gone too far and hopefully would have had the strength to get out early.  Discussing and reading about others’ experiences have also helped me to view mine more critically and finally heal some of those wounds.  I thought that if this has helped me, perhaps it will help other women.  My ultimate goal is that perhaps just one young woman will read these stories and be able to completely avoid damaging relationships because of them.

Q.   The series is primarily about women’s experiences.  Have you had any feedback from men, and what do you hope men reading the series will “get” from it?

This is a great question! I originally started this series for women and still tend to think of it as geared toward them; however, women are not the only victims of damaging relationships.  I recently received an email from a woman who shared that her son is in an abusive relationship.  I would love the opportunity to share stories of broken relationships from the male perspective, although I think that men are still a little more reticent about discussing those experiences (but all the more reason they need to be shared).  If there are any men that would like to write a piece, please don’t hesitate to contact me - your voice is important and I do publish pieces anonymously upon request!


This series can benefit all men in that it gives them a window into the lives of women who have endured damaging relationships.  Since so many women will be in an abusive relationship of some kind in their lifetime, there is a high probability that a man will marry a woman who retains the scars of a past abusive relationship.  It’s important that they are able to understand and identify the scars that their loved ones carry.  Fathers also need to be aware of the kind of relationships that they need to prepare their daughters for and warn them against.

Q.  Do you have a “favorite” or most-important to read in the series?  I read through each of the selections, and all were so important, well-written and handle tough topics sensitively.   In particular, the post titled, “He didn't really love me and want to protect me. He wanted to control me” was especially well-done.  Do you have one you consider a must-read?

I think they all discuss different important aspects of damaging relationships.  Each woman’s experience is different, so I think it is important to get as many stories as possible out there.  I’m hesitant to say that one is better than the other because each person will be affected by each one differently.  The ones that have been most healing for me based on my past experiences may not have the same meaning for someone else.  I think all the women who have shared have been extremely courageous in telling their story.

Q.  Do you see this as an ongoing series, or do you plan to wrap it up at some time in the future?

As long as there are people willing to share, I will be open to continuing the series.  I think there are many aspects that still need to be addressed.  Particularly, I would be interested in pieces from friends and family of those in damaging relationships.  I would also like pieces that are more advice-based in nature, for example, “how to identify warning signs of a damaging relationship,” or “what to do if someone you know was in an abusive relationship.”

Q.   Is there anything else you would like to add, or wish I would have asked?

Many of the pieces that have been written so far have dealt with physical or sexual abuse; however, I envisioned the series to include all relationships that are “damaging”.  Many women (and men) have been in relationships  that have left them feeling broken even though their relationships may not meet the definition of abusive.  Relationships in which one person is constantly belittled, in which infidelity is a factor, or which left one (or both) members scarred is a broken relationship.  These stories have a place in the series as well.


Although I have already addressed this in several questions above, I would like to add that I am always taking new pieces.  If someone reading this feel like he/she has something to contribute, even if it isn’t on a topic I’ve specific addressed interest in, please contact me at catholicnewlywed@gmail.com.